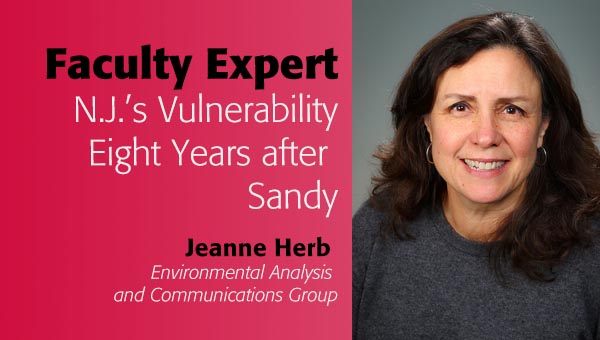 Rutgers University–New Brunswick experts are available to discuss the busy 2020 Atlantic hurricane season and New Jersey’s vulnerability to coastal storms and flooding eight years after Superstorm Sandy, along with how to boost resilience. After transitioning from a Category 3 hurricane, the intense post-tropical cyclone made landfall in New Jersey on Oct. 29, 2012.

Tropical Storm Zeta may move over New Jersey later this week, according to the National Hurricane Center.

“While the hyperactive 2020 Atlantic tropical season is quieting down, it isn’t necessarily out yet,” said David A. Robinson, New Jersey State Climatologist and a Distinguished Professor in the Department of Geography in the School of Arts and Sciences. “All we need are memories of Sandy to remind us of what a late season storm can bring to New Jersey. Amazingly coming one year to the day after New Jersey’s most impressive October snowstorm on record, the death, destruction and overall transformative nature to the psyche of the state from Sandy demonstrates the wide range of weather a transitional season can impose on our region.”

“Will there be an encore this season, one which brought two tropical storms to New Jersey (Fay and Isaias) and rains from the remnants of several other systems?” Robinson asked. “The next few weeks will tell, but as Sandy taught us, we must never let our guard down even as summer is in the rearview mirror and winter lies ahead.”

Karen M. O’Neill, an associate professor in the Department of Human Ecology in the School of Environmental and Biological Sciences, said: “Since Hurricane Sandy, the state government and university scientists have gathered more data about hurricane vulnerability, the National Weather Service has improved its emergency messaging and residents have formed social media networks to get the word out about hurricanes. Some local governments have taken action to reduce hazards. But many of us are still living in areas that face direct storm hazards. Climate change is making sea levels rise, making the likelihood of storm surge damage even greater than it was when Sandy hit. It is also important for people to remember Sandy’s damage to inland communities and the time it took to put port facilities, electric utilities, transportation systems and gas stations back into business. Building robust and resilient systems remain key tasks for our state.”

“Resilience of the New Jersey coast will not happen overnight or with one decision or one set of people,” said Lisa Auermuller, assistant manager at the Rutgers-managed Jacques Cousteau National Estuarine Research Reserve in Tuckerton, New Jersey. “True resilience takes the co-creation of a shared vision, a plan for how to achieve that vision and assistance towards implementation. A resilient community is not just one that knows how to protect themselves from hurricanes, but one that understands the values of all their residents, their businesses, their built environments and their natural spaces. Being resilient means being able to adapt and shift, especially when the baseline is always moving. We are all in this for the long game.”

“I think the question for New Jersey is whether we have fully integrated our lessons learned from Hurricane Sandy into our planning and decision-making, especially with regard to communities and populations that were hardest hit,” said Jeanne Herb, executive director of the Environmental Analysis and Communications Group at the Edward J. Bloustein School of Planning and Public Policy and co-facilitator of the New Jersey Climate Change Alliance. She also co-directs the New Jersey Climate Change Resource Center.

Robert E. Kopp, director of the Rutgers Institute of Earth, Ocean, and Atmospheric Sciences and a professor in the Department of Earth and Planetary Sciences, said: “Sea-level rise has already increased coastal flood risk in New Jersey substantially. By integrating climate change and sea-level rise into regional planning, we can reduce the human and economic costs of these changes.”