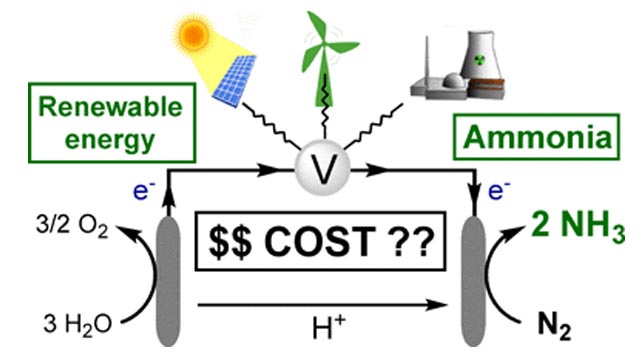 To meet the world’s growing demand for food an increased input of nutrients, particularly nitrogen, is needed to support the intensification of agricultural production.  This is achieved through the production of ammonia, which contains nitrogen. It is currently synthesized from nitrogen and hydrogen using the Haber−Bosch process (H-B), which is projected to support half of the world’s food production by 2025, with the share further increasing in subsequent decades.

The Haber–Bosch process produces ammonia from hydrogen and nitrogen gases in a globally important energy-intensive process that uses coal or natural gas as a fuel and hydrogen source. Direct electrochemical ammonia synthesis from nitrogen and water using renewable energy sources presents an alternative to the Haber–Bosch process that would be more sustainable. Additionally, the different production structure of direct electrochemical nitrogen reduction technology suggests a supply chain alternative to the ammonia industry and a method for load leveling of the electrical grid. This alternative route to ammonia from dinitrogen would require smaller capital investments than the Haber–Bosch process and would not require a fossil fuel supply.

The impact of dynamic electrical power pricing is analyzed for a system that could take advantage of pricing volatility. The authors show that, under certain scenarios, at achievable levels of energy efficiency with a future electrocatalyst, direct nitrogen reduction would be economically competitive or advantageous compared with Haber–Bosch-based ammonia production.

Nitrogen fixation is critical to the agricultural production necessary to feed humanity and has potentially tremendous value for the storage, transportation, and consumption of renewable energy. But while conventional natural-gas-based H-B production provides a low cost to the producer, its combined social and private cost is high if even conservative estimates of the social costs of GHG emission are included.

In addition, the reliance of conventional H-B on fossil fuels leads to vulnerability to volatile global market prices and a complex intersection with the geopolitical landscape.96At the current time, E/H-B is the only technology that is efficient enough to feasibly replace H-B on the scale necessary for fertilizer production. The results of this study indicate, however, that the development of a feasibly efficient ENR process is a more attractive ultimate solution. Although the current state of ENR technology is still far from economically feasible for this scale, the fundamental considerations illuminated in this work indicate that the development of an efficient ENR technology has enormous potential for reward.

The Bloustein Nexus: Bringing together policy, planning, and health

Research: Does urban planning for immigrants need to be different?