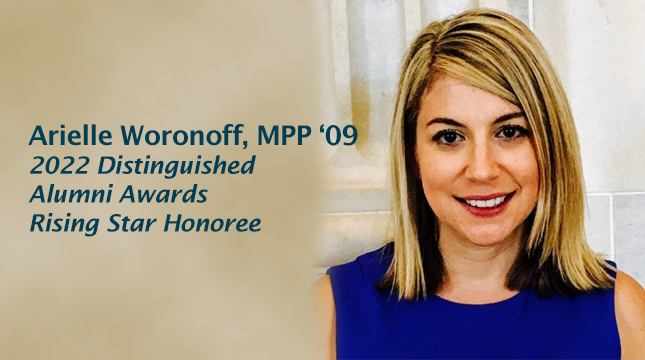 Arielle Woronoff started her college career at Rutgers thinking she wanted to become a lawyer.

After earning her bachelor’s in philosophy in 2006, she began her first job at Legal Services of New Jersey. There, she came to realize that most people don’t need a good lawyer but rather, they need better laws.

Arielle is currently the Director of the Office of Legislation at the Centers for Medicare & Medicaid Services (CMS) at the U.S. Department of Health and Human Services. She advises the CMS Administrator on policy and operations and serves as the agency’s chief liaison to Congress.

Though unable to be at the event in person, Arielle was able to send her thanks virtually. “I am honored to be recognized by the Bloustein School and I can honestly say that there was no better place for me to continue my education than at Bloustein,” she said. “This is the lens with which I approached law school and my career ever since, during my time working on Capitol Hill. I still use the skills I learned in graduate school every day in my current role.” She develops and executes legislative strategy for key CMS priorities and provides strategic and technical input on agency administrative actions including during the development, passage, and implementation of the Inflation Reduction Act.

Prior to this role, Arielle served as Senior Health Counsel for the U.S. Senate Committee on Finance, Majority Staff under Chairman Ron Wyden (D-OR). Her portfolio was focused on the Affordable Care Act, drug pricing issues, and Medicare Advantage. Before the U.S. Senate Committee on Finance, Arielle worked for the House Energy & Commerce Committee for Ranking Member Frank Pallone (D-NJ), covering Medicare Part B, the Affordable Care Act, and health information technology.

Early in her career, she advised Senator Cory A. Booker (D-NJ) on health policy, developing and advancing the Senator’s health policy priorities during his first year in the Senate. She was also Domestic Policy Counsel for Congressman Sander M. Levin (D-MI), the Ranking Member of the House Committee on Ways and Means, advising the Congressman on health care, Social Security, income security, and budget issues.

“I encourage the current class of students to stay passionate and engaged. Know that there is a world of opportunity out there for you to apply yourself to, using all the important skills that you are honing,” she concluded.

A New Jersey native, Arielle currently lives in Washington, DC with her husband and daughter. In addition to a Master of Public Policy degree with a concentration in health policy from the Bloustein School, she earned a Juris Doctor from Georgetown University Law Center.