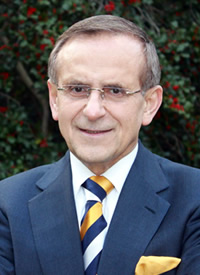 
Hooshang Amirahmadi holds a Ph.D. in planning and international development from Cornell University. Acclaimed for his contributions to improving United States-Iran relations through promoting world peace and humanistic studies, he is the founder of the Center for Iranian Research and Analysis, where he served as director for many years, and founder of the American Iranian Council, a nonprofit research organization devoted to improving dialogue and understanding between the peoples of Iran and the United States.

He is the former director of the Rutgers’ Center for Middle Eastern Studies and served as chair and graduate director of his department at the Bloustein School and as the University Coordinator of the Hubert Humphrey Fellowship Program. Dr. Amirahmadi was a candidate for President in the presidential elections in Iran in June 2005, but the conservative and religious Guardian Council disqualified him for his American citizenship and democratic platform. Dr. Amirahmadi is also the president of Caspian Associates, Inc., an international strategic consulting firm headquartered in Princeton, New Jersey.

Dr. Amirahmadi is the author of The Political Economy of Iran under the Qajars, Revolution and Economic Transition: The Iranian Experience, and three other books in Persian on civil society, industrial policy, and geopolitics of energy. He is also editor of 10 books on Iran and the Greater Middle East, and 16 conference proceedings on US-Iran relations. His edited books include The Caspian Region at a Crossroad: A New Frontier of Energy and Development; Small Islands, Big Politics: The Tomb and Abu Musa Islands in the Persian Gulf; The United States and the Middle East: A Search for New Perspectives; Post-Revolutionary Iran; Iran and the Arab World; and Reconstruction and Regional Diplomacy in the Persian Gulf. He has also authored over 200 journal articles and book chapters as well as numerous editorials, magazine articles, interviews and book reviews in both English and Persian. A frequent contributor to many conferences in Europe, North America, Asia, Latin America, Africa and the Middle East, Dr. Amirahmadi’s writings have been translated and published in Europe, Iran and the Arab world.

The recipient of competitive fellowships and grants from distinguished private foundations and corporations including the U.S. Department of Higher Education, Rockefeller Brothers Fund and Open Society Institute, he is also a frequent contributor to national and international TV (including CNN, FOX, BBC, ABC, PBS, VOA), radio, and newspapers. He has also served as a consultant for the UNDP, the Aga Khan Foundation, the World Bank, and several governments, law firms, and private companies throughout the world.

Dr. Amirahmadi’s pioneering work on dialogue, understanding and better relations between the United States and Iran is widely acknowledged in the United States, Iran and beyond. His graduate teachings at Rutgers include courses on global restructuring and public policy, international economic development, and the Middle East in transition.