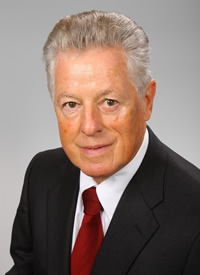 Governor James Florio was a Founding Partner of Florio Perrucci Steinhardt & Fader and served as Chairman of the firm’s energy, environmental law, government and regulatory affairs, and the healthcare law groups. Gov. Florio was a Senior Fellow for Public Policy and Administration at the Bloustein School

He served on the Board of Directors of the NJ Health Care Quality Institute, was Co-Chairman of the Regional Plan Association’s New Jersey Committee, and was a member of the Board of Trustees Fund for New Jersey.

Mr. Florio entered public service in 1969 serving three terms in the New Jersey General Assembly. He served as the 49th Governor of the State of New Jersey from 1990 through 1994 and in the United States House of Representatives from the 1st Congressional District from 1974 – 1990.