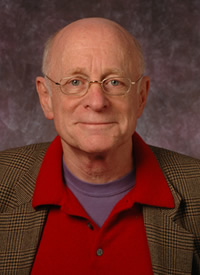 
Norman Glickman retired as University Professor in 2015. During his tenure, he conducted research and teaching in urban and public policy and studied the work of non-profit organizations. He was also a certified mediator of public policy disputes. Dr. Glickman passed away in 2019.

In 2003, Glickman was part of a team at Rutgers that received a five-year, $10-million grant from the National Science Foundation to establish a Center for Learning and Teaching. The thrust of the CLT is “Mathematics and America ‘s Cities” and Glickman’s role is to research and teach about the connection between math teaching in inner-city schools to institutions and families in poor neighborhoods.

From 1989 to 2000, Dr. Glickman directed the Center for Urban Policy Research. During that time, he and CUPR won awards for research and service from the United Nations, the Fannie Mae Foundation, the APA, and other organizations. Glickman was awarded the Lindback Prize for Distinguished Teaching from the University of Pennsylvania and holds HUD’s Certificate of Special Achievement.

Glickman previously worked with community development organizations throughout the country on issues of economic development and poverty.