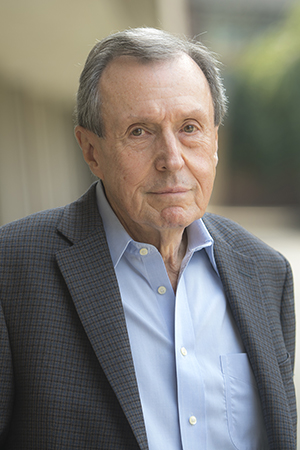 
James W. Hughes is University Professor, named to that position in 2017 by the Board of Governors of Rutgers, The State University of New Jersey. As such, he reports solely to the chief academic officer (Executive Vice President for Academic Affairs) of Rutgers and has the university-wide privilege of conducting research and educational activities across the disciplines and schools of his choice. This position follows his 22-year tenure (1995-2017) as the dean of the Edward J. Bloustein School of Planning and Public Policy at Rutgers.

As dean, he started from a base of three small programs and created a nationally and internationally renowned planning and public policy school, comprising 18 major research centers and institutes, ten major academic degree programs, and a cadre of distinguished scholars, teachers, and researchers. The school’s graduate planning program consistently ranked third in the nation during the last ten years of his deanship.

With fewer than 40 tenured faculty, the school’s annual research expenditures eventually peaked at $20 million per year under his leadership. While its research and scholarship spanned both global and national domains, the school also acted as an applied research arm for many of New Jersey’s state departments and agencies, focusing on areas such as housing, commercial real estate development, transportation, the economy, state fiscal forecasts, energy and utilities, multi-dimensional impact analysis, survey research, climate change, and sustainability. Strong relationships were developed not only with the state legislature, governor’s office, and congressional delegation, but also with the corporate leadership of the state, leading to substantial private sector sponsored research partnerships.

He is a nationally recognized expert on economic, demographic, housing market, and real estate development issues. He is author or co-author of 35 books and monographs and more than 150 articles. Among his co-authored books are The Atlantic City Gamble, published by the Harvard University Press and four published by the Rutgers University Press: America’s Demographic Tapestry: Baselines for the New Millennium; Population Trends in New Jersey; New Jersey’s Postsuburban Economy; and New Brunswick, New Jersey: The Decline and Revitalization of Urban America. An additional book is currently under contract with the Rutgers Press: Rutgers Then and Now: Two Centuries of Campus Development–A Photographic Odyssey.

He continues to direct the Rutgers Regional Report (RRR) that he created in 1989. He has produced more than 100 major economic, demographic, and market reports on the broad multistate metropolitan region centered on New York City. During the pandemic in 2020, a new series – Fast Track Research Notes – produced seven monthly issues monitoring the impact of Covid-19 on the economy.

Dr. Hughes has served on numerous boards and commissions, such as the Board of the Cooperative Housing Foundation (Washington, DC), the Governor’s Commission on Jobs, Growth and Economic Development, the Governor’s Property Tax Commission, the Governor’s World Class Economy Task Force, the Economic Advisors Board of the Council of the City of New York, the Corporate Board of the Elizabethtown Water Company (then the largest water utility in New Jersey), the Rockefeller Foundation’s Transportation Task Force of the Hudson Basin Commission, and the Council of Academic Policy Advisors to the New Jersey State Legislature. He currently serves on the Industry Advisory Board of the Rutgers School of Engineering, and the Board of Trustees of the New Jersey Conservation Foundation (NJCF).

He has provided extensive budgetary and economic testimony before many New Jersey State Legislative committees; he has also provided numerous policy briefings both in Washington, DC, New York City, and Trenton, NJ on demographics and the economy. He was a contributing editor to the magazine American Demographics for 14 years and was both a Woodrow Wilson Fellow and a Ford Foundation Fellow. He maintains an extensive public speaking schedule (approximately 30 per year) focusing on economic and demographic issues for a wide array of public, private, and professional organizations.

He is a 1965 graduate of the (then) Rutgers College of Engineering and was the last recipient of a baccalaureate degree in planning engineering. Upon graduation, he served in the US Army as an artillery officer. He returned to Rutgers and received the university’s first conferred master’s degree (MCRP) in city and regional planning (1969) and was subsequently awarded the university’s first Ph.D. in urban planning and policy development (1971). He then joined the Rutgers urban planning faculty at Livingston College in 1971. Fifty years later, he was the featured faculty speaker for those honored at the Rutgers Annual Faculty Service Recognition Ceremony.

Among his many subsequent career awards were the 2014 Medal of Excellence of the Rutgers School of Engineering (the year the school celebrated its 150th Anniversary), the New Jersey Bankers’ Award for Outstanding Commitment and Contributions to the Banking Industry, the Distinguished Public Service Award of the New Jersey State League of Municipalities, Distinguished National Fellow of the National Association of Industrial and Office Properties (NAIOP), the Rutgers Presidential Award for Distinguished Public Service, and the Lifetime Achievement and Leadership in Planning Award of the American Planning Association (New Jersey Chapter) (The chapter also established a new annual planning award in 2017 recognizing and celebrating his legacy: The James W. Hughes Applied Research Award). In 2021, he was inducted into the NAIOP Hall of Fame.