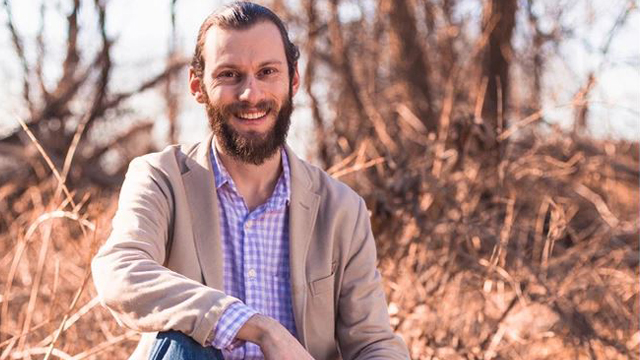 Ian Vlahović graduated from Rutgers’ Mason Gross School of the Arts in 2014 with a degree in Music Education. Deciding that he didn’t want to pursue teaching after graduation, he began a career as a freelance French horn player. He worked as a brass instrument repair technician and performed with several groups in the NYC area from 2014 until the pandemic hit.

In 2017, he and fellow Rutgers graduates formed PROTESTRA, an organization and orchestra of activist musicians bridging the divide between advocacy and classical music to combine live orchestral performances with their interests in social justice issues. Fascinated by the power of art and culture to affect broader societal change, Ian joined the Bloustein School’s Master of Public Policy program in 2021.

PROTESTRA’s first concert, “#NoBan,” was an immigration-themed event held in the immediate aftermath of the Muslim ban imposed by the Trump administration.  The group then took a hiatus, but reformed in early 2020.

A September 2020 virtual concert, “Take a Stand: A Concert for Black Lives,” supported the Black Lives Matter movement.  It featured live and recorded music, poetry, a panel discussion about the diversification of classical music, and works by Black composers spanning in style from European classical through contemporary music.  PROTESTRA raised over $4,000 for organizations that fight for racial equity in the classical music community and the U.S. as a whole.

“Music in Action: Heritage Against Hate” followed in May 2021, bringing attention to the xenophobia surrounding the Asian and Pacific Islander (API) community and raised funds for mutual aid organizations that serve the API community in NYC and abroad. PROTESTRA wrapped up 2021 with “Take a Stand: A Concert for Climate Action” to address the current climate crisis. Guest speakers included professors Dr. Kevin Lyons, Rutgers Business School and Dr. Mary Whelan, Rutgers Climate Institute; a portion of ticket proceeds were donated to WE ACT for Environmental Justice and the Environmental Defense Fund.

Under Ian’s leadership as Director of Operations and Chairman of the Board, PROTESTRA has become a 501(c)(3) organization with a robust following of musicians and music lovers passionate about the intersection of classical music and social justice. Ian would like PROTESTRA to delve into music education next with a focus on teaching young musicians about historically underrepresented composers, especially women and composers of color.  This would dovetail with concerts for young people, which would expose them to a wide variety of composers and music and would shape their musical tastes into adulthood.

Ian’s work with PROTESTRA has caused a shift in his focus. With an interest in nonprofit management, social justice, and advocacy, he will be pursuing these policy portfolios as he earns his Master of Public Policy, where he finds that his professors have a wealth of knowledge in these areas.  Chief among them is Professor Richard Keevey, whose budgeting course Ian has found particularly applicable for someone managing a nonprofit. He is looking forward to taking Nonprofit Management in the upcoming semester.

Visit https://www.protestra.org to learn more about PROTESTRA and their work to bridge the divide between classical music and activism.