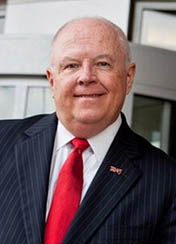 Mr. Jones developed RWJUH’s nationally recognized diversity and inclusion program, which garnered the prestigious American Hospital Association (AHA) Equity of Care award in 2015. He is frequently asked to speak about how the hospital empowered and incentivized staff to increase diversity and cultural competence while reducing costs. Under his leadership RWJUH was designated by Modern Healthcare as a “Best Place To Work” and by Diversity MBA magazine as one of the “50 Out Front Companies for Diversity Leadership: Best Places for Women & Diverse Managers to Work.”

Mr. Jones joined the Bloustein School at the time of the school’s founding in 1992, teaching as an Adjunct Faculty in the undergraduate Public Health program. Through 2013, he taught courses in Financial Aspects of Urban Health and Introduction to Health Administration, helping pave the way for the introduction of the Bloustein School’s Health Administration undergraduate and master’s programs. He taught executive leadership, management, and finance in both the graduate and undergraduate programs.

As an inaugural member of the school’s Advisory Board, he assisted in locating and resourcing opportunities to promote and strengthen its academic and research programs, and its partnerships with communities and organizations in New Jersey and beyond. He played a significant role in the MHA program’s accreditation by CAHME, helped the school establish upstream determinants of health as a cross-cutting school-wide theme, and served on the school’s inaugural Diversity, Equity, Inclusion, and Belonging Task Force.

Before joining the Bloustein School he had retired as RWJBarnabas Health’s Chief Academic Officer. Previously he taught in the School of Public Health MPH program at the University of Medicine and Dentistry of New Jersey.

Jones has been honored with numerous awards including the 2014 Outstanding Healthcare Executive Award from the Edward J. Ill Excellence in Medicine Foundation. He served as Chairman of the New Jersey Hospital Association and a board member of University Health System Consortium, the New Jersey Council of Teaching Hospitals, and the Center for Medical Interoperability (C4MI). Jones is a Lifetime Fellow of the American College of Healthcare Executives. He earned a BS in Finance from the University of Maryland and an MA in Health Care Administration from George Washington University. A veteran, Jones served as a Russian linguist in the US Air Force and for the National Security Agency.