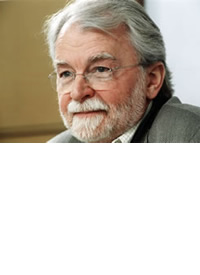 The faculty, staff and students of the Edward J. Bloustein School of Planning and Public Policymourn the loss of Professor and Associate Dean Donald A. Krueckeberg, who passed on Friday, December 15, 2006 in New Brunswick, New Jersey after a short battle with pancreatic cancer. Born in Mishawaka, Indiana, on August 31, 1938, Professor Krueckeberg left a
notable legacy in his work, service, and family. As his friends, colleagues, and occasional coauthors, we know how deeply he will be missed.

Before joining the faculty of Rutgers University in 1967, Professor Krueckeberg received a BS from Michigan State University, and both MCP and PhD degrees from the University of Pennsylvania. As Professor and Associate Dean for Master’s and Professional Programs at the Edward J. Bloustein School of Planning and Public Policy at Rutgers, the State University of New Jersey, Dr. Krueckeberg served as editor of the Journal of the American Institute of Planners (now the Journal of the American Planning Association), the leading planning
journal in the United States from 1976 to 1978,and was associate review editor there from 1968 to 1971.

Professor Krueckeberg’s scholarship is widely recognized by academic and practicing planners across the country. He published extensively in the areas of planning methods, planning history, and property theory and policy. His books include Urban Planning Analysis: Methods and Models (1973) with Arthur Silvers, An Introduction to Planning History in the United States (1983), and The American Planner: Biographies and Recollections (2nd edition, 1994). These books were path-breaking in their fields.

Professor Krueckeberg published numerous articles and book chapters, and was a consultant sought after by many local, national and international institutions and organizations. In 1996, he received an award from the American Planning Association for his JAPA article on “The difficult character of property: to whom do things belong?” In recent years, his
academic interests focused on property theory, especially the use of eminent do main; for example, his articles published in Housing Policy Debate, “The lessons of John Locke or
Hernando DeSoto: what if your dreams come true?” (2004) and “The grapes of rent: a history of renting in a country of homeowners.” (1999).

At the Bloustein School, Professor Krueckeberg taught planning methods, theory and history courses for many years. More recently, he taught advanced scholarly research for doctoral students, and property theory and land use policy. Many of his former students occupy important positions in universities, government agencies, and businesses in the United States and abroad. As a professor with whom we co-taught, we recall fondly how he provoked discussion and debate by pressing students to drill deeply into issues until the underlying values, theories, and empirical bases of planning-related policies became clear. Unlike many academics, he grew intellectually throughout his scholarly career. We especially remember how he began to focus on the importance of eminent domain years before the U.S. Supreme Court’s 2005 Kelo decision. When he contracted cancer, Professor Krueckeberg was beginning work
on a book about the ruling and its implications that he had hoped to complete during the next five years.

His service to the people of New Jersey took many forms. He was vice president of Middlesex Interfaith Partners with the Homeless and served on the boards of the New Jersey Alliance for Affordable Housing and the Camden Lutheran Housing Corporation. He served for over a decade on the Highland Park Zoning Board of Adjustment, which he chaired from 1980-83. He was an active member of the Emanuel Evangelical Lutheran Church of New Brunswick.

We will remember Don as the bow-tied, bearded, meticulous, smiling professional upholder of academic, administrative and ethical standards; a passionate lover of cities and city pleasure s who in his last years adored living a five-minute walk from work; a skillful skier, sailor and yachting commodore; and a quiet but steely moral guide to life in all its ups and downs.

He leaves behind his wife, Nancy Brannegan of New Brunswick, and his brother John Howard Krueckeberg of Fort Wayne, Indiana. He is also survived by his son and daughter-in-law, John C. Krueckeberg and Mary Cornish of Plymouth, New Hampshire.