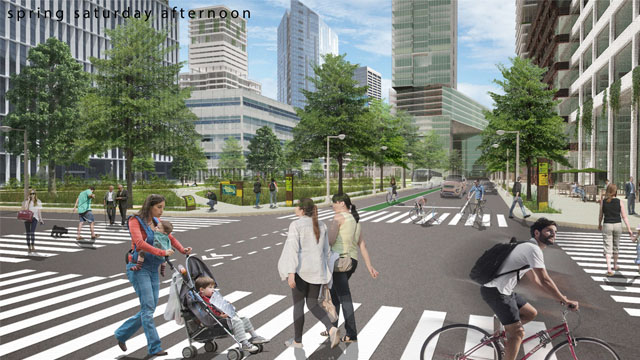 When complete, the neighborhood of Liberty Harbor North will be the most thorough exemplification to date of the principles of the New Urbanism. Due to its high-density housing, multiple transit connections, and pedestrian-oriented, mixed-use streetscape, this development is likely to serve as a textbook model for healthy urban growth in the future.

Located just a half mile west of the Hudson River on the north bank of the Morris Canal, the 80-acre brownfield site in Jersey City boasts dramatic views of Lower Manhattan to the east and the Statue of Liberty to the south. A new light rail will provide two stops in the neighborhood; and the Grove Street PATH Train, with service to both Lower Manhattan and Midtown, is a five-minute walk away. A water taxi offers convenient access to Lower Manhattan, and New York Waterways has expressed interest in providing large-scale ferry service in the near future. The site is bordered by the Van Vorst neighborhood to the east and the Hamilton Park neighborhood to the north– two historic neighborhoods worthy of emulation.

The plan is organized as an open network of small city blocks, designed to take optimal advantage of the beauty and convenience of the site. Its structure most closely resembles that of the Upper West Side, where a few wide avenues lined with tall buildings are connected by many narrow streets lined with townhouses. Most of the smaller streets are oriented southward toward the canal, with the central street directed at the Statue of Liberty. Three larger-scale thoroughfares cross the site on an east-west axis, the southernmost of which connects to a linear park along the canal. Together with Liberty State Park on the other side of the canal, this park provides public access to the waterfront and serves as a permanent greenscape along the neighborhood’s southern border.