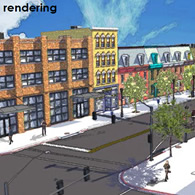 Sayreville, New Jersey is located inland along the Raritan River, southwest of Perth Amboy and east of New Brunswick in Middlesex County. According to the 2010 American Community Survey, the total population of Sayreville is 42,704 people. 68.6% of the population is white, 11.6% black, and 17.1% Asian. The median household income in Sayreville is $77,918, which is compared to the state median income level of $71,629. The city has approximately 15,636 households with 95.4% of units occupied. Sayreville boasts a long history of industrial activity, housing the clay, sand & glass, chemicals, munitions, and railroads industries, and continues to have a strong industrial base today. The city experienced severe flood damage from Hurricane Sandy in 2012, and is still trying to redevelop many of its vacant lands.

The primary focus of this report’s study is an area of vacant and open space land located in central Sayreville, west of the city’s Main Street, and  enclosed by MacArthur Avenue, and Dolan Street to its south. The area currently has vast unused lots (to the northwest and southeast), and there is no vehicular road that passes through the site from east to west, decentralizing the city’s Main Street. Mostly single-family residential homes line the streets (Main, Dolan, and MacArthur) around the site area. The proposal for this study area is a redevelopment plan, introducing mixed and multi-use housing in order to create a more accessible downtown core.