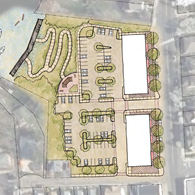 As of the 2017 American Community Survey, the Borough of Red Bank is a community of approximately 12,220 residents and a land area of 1.75 square-miles in Monmouth County, New Jersey. Situated on the southern bank of the Navesink River, Red Bank has abundant boating access to Sandy Hook Bay and other coastal areas in Monmouth County as well as regional transportation connections via NJ-35, the Garden State Parkway and the New Jersey Transit North Jersey Coast Line. Initially settled by English settlers in the 17th century, the Town incorporated in 1908 and has since become a bustling cultural and performing arts center with a quaint historic downtown.