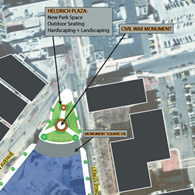 In this exercise, a site plan is created using Adobe Illustrator for a project for a “proposed” site, which in reality has already been completed. The basemap is
from the 2002 orthophotography, taken before the construction of the Heldrich and available from the New Jersey Geographic Information Network. The existing
buildings and new building footprints were created using vector lines and shapes and appropriately labeled using call-out boxes to maximize legibility. Rockoff Hall University Apartments, completed in 2005, was also not yet constructed so the extent of slated demolition is marked. The Apartment complex on New and George Streets remains under construction as of Spring 2012.