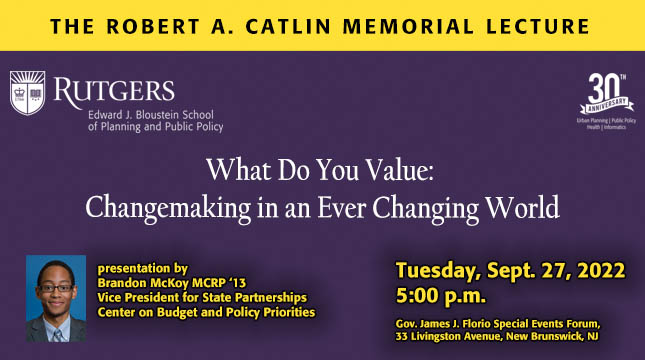 In a rapidly evolving world where discord and conflict dominate the public square, policymaking in the public interest is as hard as it has ever been. On Tuesday, September 27 Brandon McKoy MCRP ‘13 will present, “What Do You Value: Changemaking in an Ever Changing World,” as the 2022 Robert A. Catlin Memorial lecture.

With 15 years of experience in social policy research, advocacy, and implementation, he will delve into how he determined what drives his values and priorities, hoping to model how people can develop a career full of purpose and impact. He will also discuss his experiences supporting robust democracy and effective public programs, and how they shaped his career of public-interest work. By pushing against conventional wisdom, maintaining a long-term view and developing a solid professional and personal network to aid his efforts and reach his goals, he hopes to help students and young alumni better understand how they can
prepare for public-oriented careers during times of incredible national strife and difficulty.

The event will be held in person (no virtual option) at the Gov. James J. Florio Special Events Forum, 33 Livingston Avenue, New Brunswick, NJ. It will begin at 5:00 p.m. Free and open to the public. Register at go.rutgers.edu/ejbcatlin2022

McKoy is the Vice President of State Partnerships on the State Fiscal Policy team. He helps support member organizations of the State Priorities Partnership (SPP) network by connecting them with vital resources as they research and promote policies that advance racial and economic justice efforts and improve the lives of communities across the country. Prior to joining the Center, McKoy was President of New Jersey Policy Perspective (NJPP), a member organization of the SPP network, and led the organization’s efforts in shaping policy debates. McKoy previously also served as NJPP’s Director of Government and Public Affairs, and, prior to that, as Policy Analyst. He joined the organization in 2014 as a national fellow under SPP’s and the Center on Budget and Policy Priorities’ State Policy Fellowship Program.

He has served on the boards of various community organizations, advised governors on economic and tax policy, and participated in multiple task forces to advance racial and economic justice and reduce barriers in marginalized communities. Before NJPP, McKoy worked as a Program Associate at The Fund for New Jersey, where he assisted in grantmaking on public policy issues that particularly affect low-income and minority populations in New Jersey.

He has received multiple recognitions, including 40 under 40, top millennial leaders, and top leaders of color awards in New Jersey, and is an alum of the New Leaders Council – New Jersey chapter, where he served as Director of Mentorship, Director of Diversity, and Deputy Director. McKoy holds a Master’s degree in City and Regional Planning and Policy Development from Rutgers University’s Edward J. Bloustein School of Planning and Public Policy and a Bachelor of Science degree in Social Psychology from The College of New Jersey

The Robert A. Catlin Memorial Lecture honors the legacy of Robert A. Catlin, Bloustein School professor, who died in July 2004. Dr. Catlin began his career as a staff planner for governmental agencies and community organizations in several cities, including Los Angeles, Washington, D.C., and New York. He also served as dean of the College of Social Science at Florida Atlantic University, dean of the Camden College of Arts and Sciences at Rutgers, and provost and vice president for academic affairs at California State University, Bakersfield. He was inducted as an AICP Fellow in 2001. At the Bloustein School, he specialized in urban revitalization and the impact of race in public policy decision-making. See less