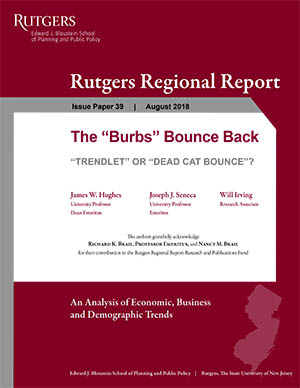 A new Rutgers Regional Report, “The ‘Burbs’ Bounce Back: ‘Trendlet’ or ‘Dead Cat Bounce’?” finds that the predicted transformative demographic shifts of the early part of the decade (2010-2016)—an urban resurgence and a suburban malaise—may, in fact, be reversing. The report, authored by James W. Hughes, University Professor and Dean Emeritus of the Bloustein School; Joseph J. Seneca, University Professor Emeritus; and Will Irving, research associate at the Bloustein School, indicates that the most recent census estimates (2017) show suburban population growth surpassing that of the urban core.

“During the 2010-2016 period, the broad metropolitan region showed an almost 75 percent growth in population in the urbanized regional core, while the suburban ring increased by only 25 percent,” said Hughes. “It appears, however, that in 2016-2017 this pattern has reversed itself, with almost 62 percent of the population increase in the suburban ring.”

The authors cautioned against generalizing the comparison of a three-year period to a 30-year period in a previous 2014 Rutgers Regional Report, “The Receding Metropolitan Perimeter.” Offering the same careful outlook in the most recent report, they also indicate that if the time frames do indeed represent two fundamentally different eras—namely, suburbanization/urban decline versus re-centralization/perimeter contraction—then a transformative regional change may be underway that is only just now beginning to be revealed.

The authors put forth many possible factors that may be responsible for the change, many of which are discussed at more length in the book New Jersey’s Postsuburban Economy (Rutgers University Press, 2014) But at this time, determining whether the end result will be a long-term, fundamental shift or a temporary change in growth dynamics and population distribution within the region will be difficult.

The Rutgers Regional Report produces formal studies on regional and state economies, demographics, housing markets and other key public policy issues and is used extensively by the state’s planning and public policy communities. The full report is available at https://bloustein.rutgers.edu/reports/rrr/RRR39.pdf.