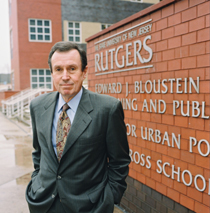 Bloustein School Dean James W. Hughes, PhD ENG’65, GSNB’69, ’71 was the recipient of the Rutgers School of Engineering’s Medal of Excellence Award for Overall Achievement at a dinner and reception held on Thursday, October 2.

Hughes, dean of the Bloustein School since 1995, is a nationally-recognized academic expert on demographics, housing, and regional economics. He has provided extensive budgetary and economic testimony before many New Jersey State Legislative committees, policy briefings both in Washington and Trenton, and consulting to numerous federal, state, and local public bodies as well as private and corporate clients. He has produced 37 major economic/demographic/housing studies on New Jersey and the New York region as director of the Rutgers Regional Report. He was recently a member of Governor Christie’s Housing Opportunity Task Force and served on the NJ Governor’s Commission on Jobs, Growth and Economic Development, and the Governor’s Logistics Council, as well as corporate boards and task forces. He was named a Distinguished Fellow of the National Association of Industrial and Office Properties and has been both a Woodrow Wilson and Ford Foundation Fellow.

For more information about the other award winners, visit the School of Engineering website.