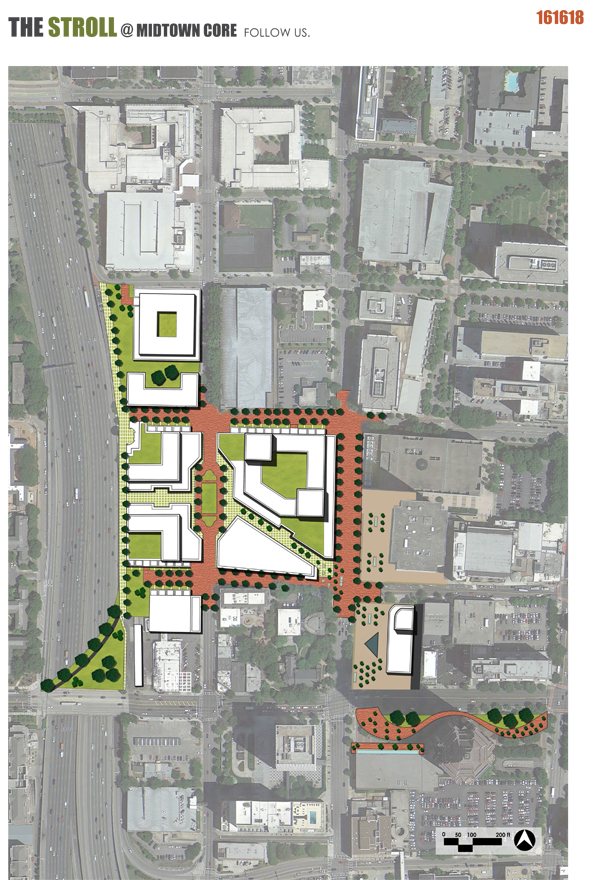 Teams of five students from universities around the country compete for a prestigious award and a $50,000 prize at the annual Urban Land Institute/Gerald D. Hines Student Urban Design Competi­tion. This year, a group of four Bloustein students, Mallory Clark, Patrick Clark, Roman Titov and Ai Yamanaka, and Rutgers Business School student Kristin Decker, entered the competition to bring their original ideas to the national stage.

The Hines competition is based on ingenuity and creativity in a limited time frame. Each year a new neighborhood, in different cities around the county, is chosen for the competition. The teams are tasked with creating a comprehensive redevelopment plan that includes drawings, real-world financial analysis and a site plan. The competition calls itself an “ideas competition;” there is no expectation that any of the submitted schemes will be applied to the site, but rather to see creative solutions to real-world problems. Once ULI releases the current year’s competition neighborhood, competing teams then have just two weeks to submit their plan.

This year’s selection was an area in Atlanta’s Midtown South neighborhood. The Bloustein proposal was named “The Stroll,” and focuses on new neighborhood connectivity while retaining a historic feel. According to the proposal, “‘The Stroll’ [would provide] people with pedestrian and bicyclist access to nearby shops and amenities serving to increase street livability and decrease vehicular use.”

In addition to changes in the transportation infrastructure, “The Stroll” creates a new residential and commercial character for the neighborhood. In the financial analysis the team included new high-density and affordable housing units, a hotel, a senior-care center, daycare center, and a health and wellness facility.

Throughout all of the design proposals, new and cutting-edge sustainability features were incorporated, such as permeable pavement and new storm water management systems.

In February, the jury will select four student teams as finalists. These teams are then requested to expand their proposal and present it to the jury in Atlanta. This year, applications were submitted from 140 teams representing 59 universities in the United States and Canada. Included are 700 participating students, 141 academic advisors, and 41 professional advisors. Since the first competition was held in 2003, over 6,700 students on over 1,100 teams have participated, representing schools in the U.S. and Canada.

Though still waiting to hear whether their proposal has made it to the next round of the competition, the students are proud of their work and have printed out their site plans to hang around the Bloustein student lounge.