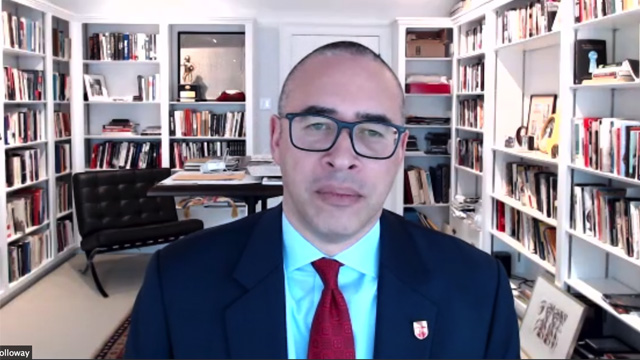 Dr. Jonathan Holloway, President of Rutgers University, presented the Bloustein School’s Robert A. Catlin Memorial Lecture* on Monday, March 22. The talk, “Racial Memory, Woodrow Wilson, and the Making of the Nation” explored the legacy of President Woodrow Wilson both as President of the United States and of Princeton University.

President Holloway described Wilson’s legacy as a series of lightning strikes in the 20th century.  This is a play on a quote attributed to Wilson that the D. W. Griffith silent movie, Birth of a Nation, was written in lightning. The movie was based on a novel that sought to justify the founding of the Ku Klux Klan and perpetuated the mythology of white supremacy.

Wilson approved of the movie and its message despite his being viewed as a progressive.  Dr. Holloway looked at Wilson’s legacy through the racial lens of political, cultural and social sensibilities.  He was viewed as a reformer when he was president of Princeton University, where he improved academic programs to make Princeton more academically rigorous. He established Princeton’s graduate school and tried to break up Princeton’s eating clubs.  The last he was unable to do because of fierce opposition by the school’s alumni.

While his innovations at Princeton were hailed as great reforms, Wilson could not conceive of admitting Black students. Wilson maintained that he wished to be fair to Black students. This “fairness” was on Wilson’s terms.  Those terms were that Black students were not up to the academic rigors that admission to Princeton demanded. He believed that Blacks needed to know their place and their place had never been or would be at Princeton.  Blacks could not meet the academic challenges of Princeton’s newly reformed curriculum.

Wilson was elected to the governorship of New Jersey in 1910.  He was a progressive candidate who eschewed the powerful party bosses of the political machine much to their surprise. This led to his nomination for the presidency of the United States on a progressive platform.

His progressive politics, however, did not extend to racial politics.  As president, he forced many Blacks from their jobs in the federal government. These jobs offered security and opportunities for promotion that did not exist in the private sector.  Wilson pulled the ladder out from under the Black federal workforce, and by the mid-twentieth century, it still had not recovered. He turned a blind eye to the re-segregation of workspaces, cafeterias, and other physical amenities of the federal workforce.

President Holloway ended his discussion by pointing out the legacy of Wilson’s policies on his own family.  He added that the distance between Wilson’s rhetoric and his policies was vast.

*(this event was not recorded)

The Robert A. Catlin Memorial Lecture honors the legacy of Robert A. Catlin, Bloustein School professor, who began his career as a staff planner for governmental agencies and community organizations in several cities, including Los Angeles, Washington, D.C., and New York. He was inducted as an AICP Fellow in 2001, one of the highest honors that the American Institute of Certified Planners (AICP) bestows upon a member. The honor is a recognition of the achievements of the planner as an individual, elevating the Fellow before the public and the profession as a model planner who has made significant contributions to planning and society.  The Fellow has achieved excellence in professional practice, teaching and mentoring, research, public/community service, and leadership. At the Bloustein School, Dr. Catlin specialized in urban revitalization and the impact of race in public policy decision-making.

A Thank-You to Our Essential Workers