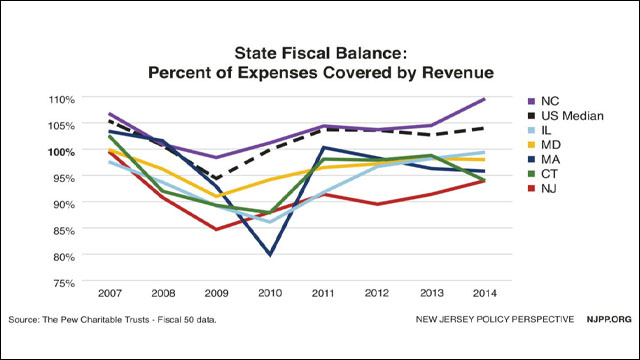 Just as New Jersey was not prepared to weather the Great Recession, the state is once again vulnerable to a future economic downturn, according to a new report released today by New Jersey Policy Perspective (NJPP). Authored by a practicum of graduate students from the Rutgers University Bloustein School of Planning and Public Policy, the report compares New Jersey’s preparation for and response to the Great Recession with that of five other states: Connecticut, Illinois, Maryland, Massachusetts, and North Carolina.

“Knowing how comparable states reacted during the Great Recession, and how those decisions have affected their overall economic recovery, is critical to understanding what options are available to New Jersey during the next economic downturn,” said Sheila Reynertson, Senior Policy Analyst at NJPP. “New Jersey had one of the slowest economic recoveries in the nation after the last recession. State lawmakers cannot afford to repeat those same mistakes.”

The report, Preparing New Jersey for the Next Economic Downturn: Insights from the Great Recession, uses a set of economic performance indicators to identify budgetary conditions that made New Jersey especially vulnerable to the Great Recession and policies that helped other state economies recover.

“Our comparisons of policy and budget decisions across states and interviews with experts from each state suggested that actions taken before the onset of the Great Recession played an important role in the range of options available to states as they faced the challenges of the downturn,” said Vineeta Kapahi, graduate student at the Bloustein School and co-author of the report. “Policy and budgetary decisions made before the recession ultimately influenced the strength and speed of each state’s recovery. As economists predict another recession in the near future, New Jersey would benefit from successful practices utilized by other states.”

The report finds that a number of budgetary actions made New Jersey particularly vulnerable to the impacts of the Great Recession, including: using non-recurring revenues for recurring expenses, skipping pension payments, using debt for recurring expenses which leads to higher debt service payments, and not investing into the state Rainy Day Fund.

“Looking at how New Jersey went into and emerged from the last recession, and how prepared it is now for the next economic downturn, it’s very hard to conclude anything other than a massive failure of state government,” said Cliff Zukin, Emeritus Professor at the Bloustein School and report advisor. “Former governors of both parties are culpable, along with the complicity of the New Jersey Legislature, for some two decades. Residents of the state deserve much better from Trenton.”

The report found important trends in states with stronger economic recoveries: states with a well-funded Rainy Day Fund were able to get through the recession with less borrowing, fund transfers, and spending cuts; states that raised taxes during the recession and sunsetted them before their economies fully recovered generally had to deal with budgetary shortfalls in future years.

“The state has not done enough to prepare for the next economic downturn,” said NJPP President Brandon McKoy. “Lawmakers must act with a sense of urgency to make sure the state is positioned to successfully weather the next recession or natural disaster. On behalf of NJPP, I sincerely thank the Bloustein practicum group for writing this report and bringing these important findings to light.”

NJPP recommends that New Jersey learn from these best practices and raise revenue from sustainable sources, like the proposed millionaires’ tax and bringing the sales tax back to 7 percent, and invest heavily into the state’s Rainy Day Fund.

“Despite being one of the most educated and affluent states in the country, New Jersey ranks in the bottom five in debt and unfunded pension liabilities, in how long the state could run on what it now has in the bank, and was dead last in its total revenue as a share of expenses in 2017,” Professor Zukin added. “New Jersey is as prepared for the next economic downturn as a skydiver without a parachute.”

Watch a recording of the press conference here. Read the more about the report and find the PDF here.