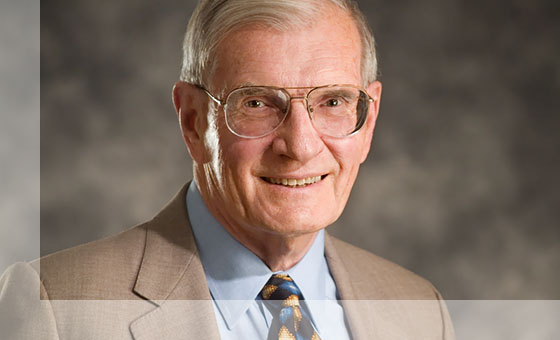 John J. Heldrich, widely considered one of New Jersey’s top business and civic leaders and widely-recognized as “the heart and driving force” behind the revitalization of the city of New Brunswick, died on Tuesday, October 28. He was 88.

He was a 1950 Rutgers University graduate and friend and benefactor to the university. His wife, Regina, who died earlier this year, also graduated from Rutgers’ Douglass College in 1942. He  was very interested in workforce issues, and in 1997 donated funding to the university to help endow the John J. Heldrich Center for Workforce Development at the Edward J. Bloustein School of Planning and Public Policy, and served as the chair of the Center’s National Advisory Board until his death.

The Heldrich Center’s longtime director, Carl Van Horn, distinguished professor of Public Policy, noted that Heldrich had an enormous impact on the community. Van Horn and others worked with Heldrich to raise funding to support a new facility to house the research center, explaining, “Our vision was to take this block that was blighted and turn it into what it is today — a mixed-used development that includes condominiums, a hotel, a conference center and research center.”

A research and policy center dedicated to raising the effectiveness of the American workplace by strengthening workforce education, placement, and training programs and policies, the Heldrich Center’s efforts concentrate on both nurturing concrete innovations in workforce practices, as well as addressing broad-scale economic policy changes that ensure Americans receive the education and training they need to be productive and prosperous in the knowledge economy of the 21st century.

Heldrich was also the founding chair of the New Jersey State and Employment Training Commission, the state agency responsible for preparing the state’s workforce to meet the demands of employees and the economy. Also a longtime and generous supporter of the arts, he was a founding member of the boards of the State Theatre, Crossroads Theatre and George Street Playhouse.

Born in 1926 in New Brunswick, Heldrich spent much of his life improving New Brunswick, where he worked for most of his life. He retired from Johnson & Johnson in 1991 after 41 years of service that included serving as corporate vice president of administration as well as being a member of its executive committee and board of directors. He was the founder of New Brunswick Tomorrow, the nonprofit organization that has spearheaded the city’s renewal. Heldrich served as chairman of the organization for 20 years.

For those who wish to make a donation in honor of John Heldrich, the family requests that you direct your gift to the John J. Heldrich Center for Workforce Development, Edward J. Bloustein School of Planning and Public Policy, 30 Livingston Avenue, New Brunswick, N.J. 08901 or the Companion Animal Fund, College of Veterinary Medicine, Iowa State University, Ames, Iowa 50011.