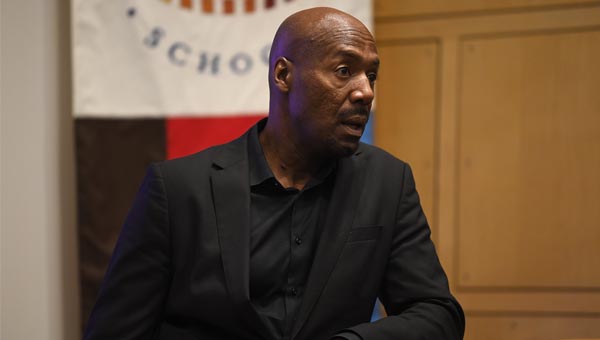 Author’s Note: This event held was just prior to the full scope of the pandemic hitting the United States, but its timeliness was uncanny. Incarcerated populations are at particular risk during the global pandemic. Health professionals and advocates support large-scale decarceration to prevent dire harm to these populations from COVID-19. Governor Murphy has released 1000 inmates from New Jersey jails; however, this comprises only about 2.5% of the incarcerated population in New Jersey.

“People usually say, prison keeps us safe,” said Paul Butler, Albert Brick Professor in Law at the Georgetown University Law Center. “But people who have family members in prison know that isn’t true.” Professor Butler, delivering the Ruth Ellen Steinman and Edward J. Bloustein Memorial Lecture on March 4, challenged the audience to imagine a world that no longer needs to ask the question “why have prisons” – a world that no longer has prisons at all.

Black Americans make up a disproportionate number of the incarcerated population in the United States. This has devastating impacts on poor black communities as well as our society as a whole. Professor Butler described how his belief in prison abolition was formed through his own past experience as a prosecutor trying to fix the system from within. “It seemed like my main duty was convincing judges to send black people to prison.” Professor Butler paused between each sentence, letting his meaning sink in. “That was kind of easy work. That’s what the system was set up to do. I became a prosecutor because I don’t like bullies. I stopped being a prosecutor because I don’t like bullies.”

Professor Butler acknowledged that, for those who are new to the idea, decarceration can be a challenging concept. “It does not mean opening every jail cell tomorrow,” he said, urging the audience to think of the process as gradual. While most prison abolitionists acknowledged that certain people require some sort of supervision in order to prevent them from harming others, “there are alternatives to prison that encompass any of the positive things that can possibly be gotten from incarceration.”

Professor Butler traced the history of mass incarceration in the U.S. noting that prison was first invented as a form of punishment in 1829 with the opening of the Eastern State Prison in Philadelphia. While incarceration has increased in various ways since, it was most significantly expanded under the Clinton administration, contributing to the U.S. having the highest incarceration rates in the world.

While black incarceration rates are “off the charts,” Professor Butler also noted that every demographic group is overincarcerated. “Even if we reduced our prison population by 40%, we’d still lock up more people than any other country in the world.” However, the overincarceration of black people in particular is one reason why reforms alone are insufficient. Since black Americans, particularly black men, are arrested at much higher rates than whites, a reformed criminal justice system would likely continue to target black men and thus worsen existing racial disparities.

Arrest rates of black men are also based in history, as Professor Butler explained. Black men became “terrifying” in the white imaginary following emancipation. The black population continued to be coded as frightening through culture and policy, through events such as the urban riots against police brutality and poor housing conditions during the civil rights movement. The violence of policing also contributes to the violence of the American criminal justice system. Professor Butler pointed out that every time violent civil unrest has broken out in black communities, it has been in response to something the police have done. Today, “there are more people in the criminal legal process…than there were slaves in 1850.”

Professor Butler emphasized that alternatives to prison must be transformative, creating positive change. Violence in high-poverty neighborhoods is caused by structural factors that should be addressed comprehensively. Professor Butler encouraged the audience to think about what prison is supposed to do for society, acknowledge how it has not accomplished those goals, and think about new ways to do so – ways to keep one another safe “without keeping people in cages,” that do not discriminate by race and class.

“The choice of who goes to court in chains should not be so fortuitous.” Professor Butler referred to quotes advocating societal transformation from well-known black public figures including Beyoncé and President Obama, and concluded his talk by observing that black Americans have been the driving force behind much of this country’s sweeping change.