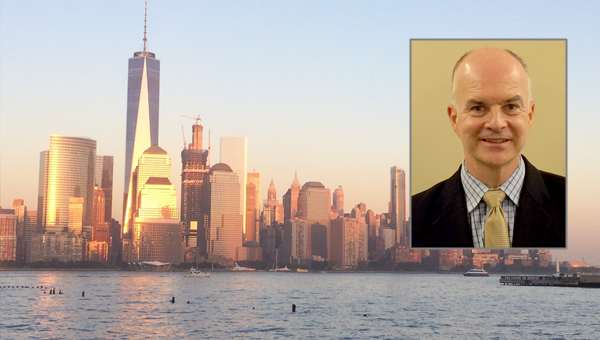 “I had just dropped off my sister who was taking a flight from Terminal C. When I arrived in the administration building we could see smoke from the WTC,” he said.  “It was so early that there was still a lot of confusion as to what was happening. There was less confusion by the time the second plane hit the tower.”

Fortunately, his sister’s flight had not taken off. While Don and other Agency staff were dispatched to the terminals to move passengers to the frontage as flights were being grounded, his sister was able to take a cab home.

Don joined the Port Authority over 21 years ago but worked as a consultant for the Agency a number of years before that. A year prior to 9/11, his office was on the 65th floor of 1WTC so he knew many of the Port Authority headquarters staff who were working there. Being part of the World Trade Center Redevelopment post-9/11 was personal not just for Don, but for the entire Port Authority.

As Deputy Director of the World Trade Center Redevelopment Department, he worked on the restoration effort for about eight years. The department was responsible for the commercial portions of the WTC including the five office towers, retail, site planning, operations and security planning, involvement in the WTC commercial design guidelines, and negotiating a host of various agreements with other public and private WTC stakeholders.

The Port Authority was just one of many stakeholders involved in the process. The effort involved hundreds—if not thousands—of individuals in both the public and private sectors who were devoted to the project over the years.  “As just one of the individuals who worked to contribute to the effort, it seemed the biggest challenge was working through the various priorities among very well-intentioned stakeholders,” he said.

He recalled there being an incredible passion and sense of purpose among all of the participants. When the stars were aligned, decisions and results were produced with incredible speed. At other times long, impassioned debates related to the best course of action occurred. “Considering the importance of what was being done,” he said, “This was not necessarily a bad thing.”

The WTC project required tremendous resources over a fairly long time period to complete the redevelopment vision. The long-term nature of the project also demanded stamina and sacrifices by all those involved spending incredible hours working to make the vision a reality. However, we all understood and valued the privilege of being a part of the WTC restoration.

Don also said he was surprised by the degree of cooperation and support throughout the Agency including the staff, executive management, and commissioners, noting that Agency was unwavering in its determination to see the WTC rebuilt, and rebuilt better.

Balancing the needs of the various constituencies—families, small business owners, large multi-national corporations, and more—was the priority. “All of the stakeholders had priorities and redevelopment goals, but first and foremost for everyone was respecting the needs and wishes of the families and creating a respective setting for the Memorial,” he said. “The North Star has been used for generations as a guiding light. Similarly, keeping the families’ priorities and needs in mind was used to provide direction. The differences that arose were not a result of indecision on the ultimate goal, but rather the best route to get there.”

Having a role—no matter how small—in helping to bring projects to life that will contribute to the well-being of the region is one of the most rewarding aspects of his career. “The public sector has a unique ability to take a longer-term and broader view of its investments and is uniquely positioned to take on projects the private sector cannot or will not become involved.  The private sector is typically under intense pressure to produce financial results over the short-term for the benefit of stockholders or bondholders.”

“What is really fascinating about the Port Authority is that it exists in the public and private sector realms. The Agency receives no financial assistance from the state and does not have taxing authority. It is entirely self-supported,” he said. While the Agency takes a longer-term view of investments, he explained there is also a keen interest to ensure financial viability.  Many Agency projects are done via public-private partnerships, tapping into the longer-term view of the Port Authority and utilizing the specialized expertise and speed of the private sector.

In his current position as a Program Director in the Aviation Department at the Port Authority, he is responsible for the redevelopment of the non-passenger components of JFK Airport such as hotels, cargo, and other commercial buildings.  He also led the development team for the restoration of the historic TWA Flight Center into an airport hotel.  Don is also responsible for the Airport Access Program, which includes all modes of airport ground transportation including parking, taxis, shared-ride, HOV buses, and Welcome Centers at four Port Authority airports.

Don, who was honored with a Career Achievement Award from the Bloustein School in 2015, said that his Bloustein School education contributed immensely in the days following 9/11 as well as his current role at the Port Authority. He noted that the school’s faculty and students were totally engaged in various planning issues whether it was environmental, transportation, housing, environmental justice, or any of the other areas. “There was a pretty intense sense of purpose,” he recollected. “Bloustein also provided the ability to engage with specialists and made the transition to coordinating with staff in similar professions seamless.”

Are you a Bloustein School undergraduate or graduate alum and want to share your story about how your major/degree has impacted your career and community? Send us an email with the details so we can follow up!