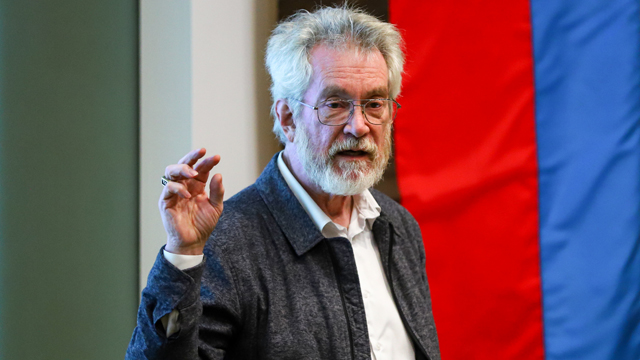 According to Dr. Pentland, big data is a way to measure the connections between people that make up society. As a jumping-off point, he noted out that political philosopher Adam Smith’s “invisible hand”—typically thought of as the market—actually functions through peer-to-peer interactions. In this way, the connections between people serve as a fundamental for thinkers as diverse as Smith and Karl Marx. And big data, which we might think of as more technical and less human, is ultimately about this connection.

Some of the connections that big data can measure, as introduced by Dr. Pentland, include the locations people choose to work and how exploratory behavior differs by socioeconomic status (SES). As an example, Dr. Pentland compared the demographics of a Chipotle and a trendy vegan restaurant located next to each other. Although the two restaurants had similar prices, the Chipotle was patronized by customers of a lower SES while the vegan restaurant was patronized by those of a higher SES. Other problems big data can address include tourism planning, the proportionality of GDP growth to inter-neighborhood diversity, and the at-risk levels of disadvantaged children.

A question Dr. Pentland spent some time tackling was that of privacy—how do we take advantage of the usefulness of big data for planning and policymaking while protecting individual privacy? “What we’ve done over the years is developed ‘software architecture’ that allows us to do that.”

Dr. Pentland introduced the OPAL (Open Algorithm) Project, developed by MIT Media Lab and other collaborators. OPAL preserves privacy by carrying out queries in aggregate, such that individual-level information cannot be discerned. He explained how it provides a way to “make maps of the conditions of society that reflect poverty…inequality…sustainability in various ways…without endangering individual privacy.” OPAL was piloted with national data projects in Colombia and Senegal. Dr. Pentland did make sure to acknowledge that there is always a tradeoff between usefulness and privacy; the middle ground is somewhere between individual level data (less private; more useful) and city-level aggregate data (more private; less useful.)

The issues discussed by Dr. Pentland are relevant to all planners and policymakers in the era of big data. This talk was also particularly timely as the Bloustein School welcomes the first cohort of students in the Master of Public Informatics (MPI) program, who before long will graduate and tackle these issues professionally.