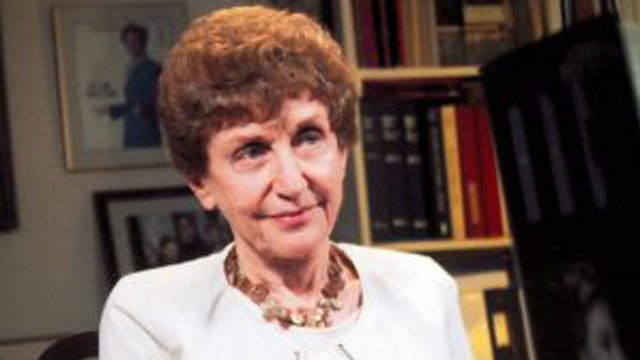 The Bloustein School mourns the loss Professor Ruth B. Mandel, former director of the Eagleton Institute of Politics who passed away this weekend at age 81 due to ovarian cancer.

The New York Times‘ obituary for Mandel recognized her lifelong passion and commitment, referring to Mandel as “a voice for women in politics.”

At the time of her death, Mandel was Board of Governors Professor of Politics at Rutgers University-New Brunswick and a Senior Scholar at the Center for American Women and Politics (CAWP), a unit of the University’s Eagleton Institute of Politics. She stepped down in August, 2019 as director of Eagleton after 24 years of distinguished leadership; before that, from 1971-1984, she was a founder and director of CAWP.

Eagleton Institute of Politics: A Profound Loss, Ruth B. Mandel

The Bloustein School has enjoyed a long-standing relationship with the Eagleton Institute of Politics since the school’s founding in 1992. Bloustein School faculty and staff have served, and continue to serve, as associates; our students rank among the highest selected annually as Eagleton Fellows. Over the next few days, we invite our faculty, staff and former fellows to share their memories of working with Ruth Mandel.

I had the pleasure of working with Ruth both in my capacity at the Bloustein School and as an affiliated faculty member at Eagleton.  Ruth was a delight to work with and a force of nature.  She understood better than most the intimate relationship between politics and policy-making and that unless you get the politics right, you will never get the policy right.  And for Ruth, getting the politics right meant a more inclusive vision of who holds office and it meant working constantly to achieve that vision.  I will miss her and so will Rutgers.

Ruth Mandel was all that the New York Times obituary writer said she was, and all that appeared about her on the Star Ledger’s front page, and, too, in all the words said by her successor at CAWP, Debbie Walsh, and, at Eagleton, John Farmer, and those of Rutgers President, Robert Barchi, but, to some few of us, she was a constant, tender, gracious, and caring friend.

Yes, we were professional colleagues, Ruth and I, attending CAWP conferences from coast to coast for elected and appointed women political figures, performing in workshops to encourage women to become more active in political and civic life, glad-handing with visitors to Rutgers, serving on search committees–the last was for the EJB dean–and on vital university committees, some of major consequence, one, certainly, that lead to major differences between us–and temporary estrangement–that had to do with the reorganization of undergraduate education, but, our connection went much deeper.  With a few other friends, we hung out in New York when I lived in the Village; we had dinners and drinks that went into the long hours, we laughed, we cried, we hung onto each other as each of us faced medical (and other) challenges and we were co-conspirators, of sorts, on things that mattered a great deal to us.

When I became the chair of the Board of Governors, Ruth held a party for me at Eagleton that, honestly, was one of the best in my life.

When Ruth ascended to lead the Eagleton Institute, there were only women present to honor her at a party at the dean’s house at Douglass, but for one man, Sandy Jaffe, who, as a program-officer-in-charge at the Ford Foundation, had provided the initial funding for the creation of CAWP, the center that Ruth founded and that started her on achieving an unequaled impact on the advancement of women in politics. How extraordinary, ordinary, and gratifying, life can be!

So much of Ruth’s story has dimensions that touch lives none of us can fully know or appreciate but in the ways that we did know her, were connected to her, we understand what a presence she was and are thankful for the privilege of knowing her.