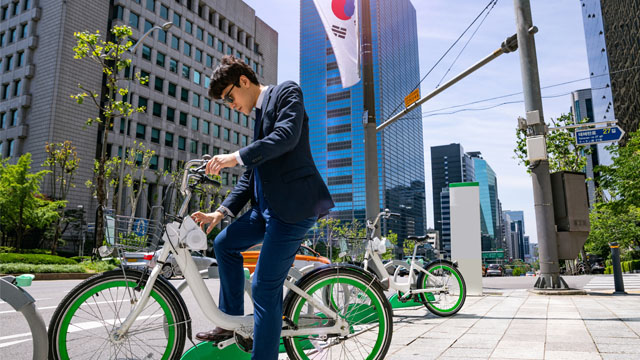 Seula Lee MCRP ’20 and a current PhD student at the University of Southern California and Bloustein School Distinguished Professor Robert B. Noland recently explored “Bikeshare trips in Seoul, South Korea,” to answer the following questions: Do trips that start and end at the same station have different usage patterns than those between different stations? How do trips vary during the day and seasonally? And ultimately, how are various land use patterns, subway stations, employment density and population density associated with the number of trips generated from each bikeshare station? They also explore the difference between “loop” trips (i.e. starting and ending at the same station) and those between two stations (origin-destination or “OD” trips).

The study was recently published in Case Studies on Transport Policy.

Seoul Bikes is a public bikeshare program and is operated by the Seoul city government.  As of December 2019, 1,520 stations provided service to most parts of the city with a total of 19,545 bikes.  This results in more than 2 million possible origin-destination (OD) pairs and generates approximately one million trips per month with some seasonal variation. Pricing is similar to other bikeshare programs, with users able to choose between daily and regular passes valid for 7 days, 30 days, 180 days, and 365 days.  One and two hourly passes are also available. The system is relatively inexpensive compared to other bikeshare systems due to government subsidies.

Lee and Noland conclude that loop trips are more likely to be recreational because they were of much longer duration than OD trips and the 10 most frequently used stations for these longer trips are almost all located near parks. This is the same finding for bike trips in North American cities despite differing spatial layouts. They find that there is a positive association between the number of subway stations within a service area and bikeshare trips.

Their research demonstrates that bikeshare programs can be a valuable part of a comprehensive urban transportation system.  There is evidence that commuter trips make up the bulk of trips, providing egress and access to subway stations.  However, recreational loop trips make up a significant portion of rides. Providing designated bike paths and lanes can increase overall usage contributing to the sustainability goals of the city.