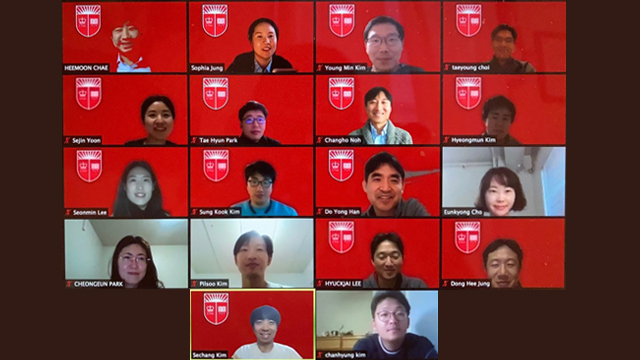 “Today we celebrate the successful one-year completion of study for our mid-career professional students from our Korea Development Institute Scholars program,” said Assistant Dean Steve Weston, as he opened the program. “While this is not our typical graduation ceremony, nonetheless it is extremely important that we congratulate you on your success during your program of study abroad here at Rutgers University, and convey to each of you how appreciative we are of you being here this academic year.”

The Bloustein School and the School’s Urban Planning and Policy Development Masters Program entered into a partnership in January 2001 to accept students from the School of Public Policy and Management of the Korea Development Institute (KDI) into the Urban Planning and Policy Development graduate program. In 2016, a new partnership enabled applicants to be accepted into the Bloustein School’s Master of Public Affairs and Politics (MPAP) program.

“As soon to be graduates of the Edward J Bloustein School of Planning and Public Policy, you complete your studies showcasing the best and brightest our field has to offer,” said Bloustein School dean Vonu Thakuriah. “We praise your accomplishments during this challenging year of 2020 and recognize the difficulty you each had in managing your academics as well as the needs of your family and friends. It is with great pleasure to acknowledge your graduation from Rutgers.”

“You travel a path taken by a select few, and will forever benefit from the relationship that we commonly share. As your dean, is with great pride and admiration that I offer my sincerest congratulations upon completion of your study.”

Rutgers and the Bloustein School are very well known in Korean academic and planning circles, and offer KDI students an excellent opportunity to broaden their knowledge and practical skills through the combination of coursework and professional internships.

The degrees were conferred upon the graduates by the program directors of their respective course of study. Kathe Newman, director of the Urban Planning program, noted, “It is such a pleasure and honor to be with all of you, though remotely. It was really our pleasure to get to learn with you this year. We enjoyed having you in class and having the opportunity to learn more about the work that you do in your home country. Speaking for our entire planning program, we wish you all of the best as you move out into your careers and in the future.”

Echoing Dr. Newman’s remarks, Andrea Hetling, director of the Public Policy program, said, “I wish we had a better and a more frequent opportunity to meet in person to get to know each other more. The KDI program is a wonderful program not only for all of you, but for all of us at the Bloustein School. The ability to interact and to engage — whether in person or, as over the past few months, remote — has been a wonderful opportunity for everyone, students and faculty included. We thank you for choosing the Bloustein School, and I look forward to continuing and growing our relationship.”

Dean Weston concluded the program by thanking the program directors, faculty, staff and administration, and other students for providing guidance and advisement to the KDI scholars. “The needs of our KDI students are great, and settling into Rutgers can be a challenge. For this reason, we certainly support the notion that it takes a village to ensure the success of the program.”

He also specifically thanked Assistant Director for Graduate Student Services and KDI coordinator Courtney Culler for her efforts in supporting orientation development and implementation and providing the scholars with a smooth transition to the U.S, New Jersey, and Rutgers. In addition, student services staff Andrea Garrido, and Cheryl Egan, and Sophia Jung provided essential efforts during orientation, the arrival of the 2020 scholars, and throughout the year. “Our staff spend an amazing amount of time and effort during the year on this program to make it possible for us to admit, orient, welcome, and host 20 KDI scholars and nearly 50 family members. The success of this program is very much a team effort, and we appreciate everyone’s support, especially during this difficult time in our history.”

Choi, Taeyoung graduated from the University of Seoul with a Bachelor’s degree in Architecture. He has been working for Korea Land & Housing Corporation for 16 years, a company that develops land and provides public housing for the improvement of the residential environment for people. He believes urban planning studies at Rutgers can greatly help improve the living environment of Korea as LH is a public institution and strengthens the core capacity of the company.

Han, Do Yong earned a Bachelor’s degree in Physics from Korea University. As Manager at Korea Land & Housing Corporation since 2005, he was the winner of the 2018 Deputy Prime Minister’s Award from the Korea Ministry of Economy and Finance, the 2018 CEO’s Award by Korea Land & Housing Corporation, and the 2016 Minister’s Award by Korea Ministry of Land.

Jung, Donghee graduated from the University of Seoul with a Bachelor’s degree in Civil Engineering. He was awarded a citation from the Korea Ministry of Trade, Industry, and Energy in 2017 and a citation from the President of Korea Express Corporation in 2006. Jung has been working for over 15 years and he is currently senior manager of the Business Development Division of Korea Expressway Corporation.

Kim, Hyeongmun graduated from Inha University with a Bachelor’s degree in Environment. He works at the environmental conservation areas of the Incheon Metropolitan City Government. Kim also published the 2017 Incheon Metropolitan City Sustainability Report in consultation with UNOSD, which points out the future direction for the environment, society, economy, and urban development for sustainable development in Incheon.

Kim, Pil Soo graduated from Korea University with a Bachelor’s degree in Asian History and a Master of Science. He is the Sales Manager for Korea Land & Housing Corporation and aspires to play a key role in building sustainable cities and become an expert in Korean urban planning policy in the future.

Kim, Sung Kook graduated from Seoul National University of Science and Technology with a Bachelor’s degree in Civil Engineering. He was awarded a certificate from the Minister of Government Administration and Home Affairs in 2013. Kim has been working for over 10 years for Jeonbuk Provincial Government and is currently Head of Nothern Branch, Road Management Office.

Kim, Taehwa received a Bachelor’s degree Degree in German Language and Literature from Yonsei University. He received the Best Staff Award for the 20th Anniversary of Foundation from Gyeonggi Urban Innovation Corporation in 2017 and the Best Soldier Award by Army Armored Brigade in 1994. He is the Planning & Coordination Manager at Gyeonggi Urban Innovation Corporation.

Lee, Sungwook received a Bachelor’s degree in Civil Engineering from Dongguk University. He was awarded a citation from the Ministry of Public Administration and Security in 2012. He comes has 15 years of experience with Korea Expressway Corporation and is currently a Senior Manager of Road Management Office.

Lim, Seon A earned a Bachelor’s degree in Civil Engineering from Honam University. She has been employed by Korea Land and Housing Corporation for 14 years with extensive experience in the complex design of metropolitan cities and new towns, the Kuwait SSAD project planning and detailed design, complex construction management, urban regeneration management, and design construction supervision. She aspires to enhance the strategies for securing the sustainability of LH in connection with U.N. SDGs and also further the studies on urban planning to solve regional inequality.

Noh, Changho received a Bachelor’s and Master’s degree in Sociology from Yonsei University. He has 17 years of experience with the Korea Industrial Complex Corporation and is currently a Senior Researcher in the Industrial Location & Business Support Office. He is particularly interested in the areas of regeneration/restructuring of industrial space, industrial space planning and land use, industrial development strategy, cluster policy, innovation, and start-up acceleration and ODA.

Park, Tae Hyun graduated from Chungnam National University with a Bachelor’s degree in Engineering. He has been an engineer in Korea Land and Housing Corporation. His professional goal is to become an expert in urban regeneration to serve better the major urban planning projects in South Korea.

Chae, Heemoon earned a Bachelor’s degree in Business Administration from Korea University. He has extensive experience as a manager at the Korea Exchange with various financial securities firms and various government agencies such as the Financial Services Commission and the Supreme Public Prosecutor’s Office in Korea. He aspires to combine the theory and best practices of policymaking and is particularly interested in the foreign business sector of the exchange.

Cho, Eunkyong graduated from Sungkyunkwan University with a Bachelor’s degree in Consumer Economics. She received the Proud Public Servant Award by the Gyeonggi Provincial Office in 2012 and the E-Government Information Protection Contribution Award by the Ministry of Public Administration and Security in 2017. She has been a Public Officer for Gyeonggi Province since 2006.

Lee, Seonmin earned a Bachelor’s degree in International Trade and Accounting from Dongguk University. She has been employed by Incheon Metropolitan City Government for 11 years and is currently with the Civil Governance Division. She received the Best Public Officials citation from the Incheon Metropolitan City Government in 2010, 2013, and 2016.

Park, Cheongeun graduated from Pusan National University with a Bachelor’s degree in English Language & Literature. She has 15 years of experience with the Busan Metropolitan City Office. She was awarded the Good Model Civil Servant by the mayor o Yeongdo-gu in 2009, the Proud Civil Servant by the mayor of Busan City in 2010 and 2016, and a certificate for contributing settlement on a self-signing fact-check system in Busan by the Ministry of the Interior and Safety in 2017.