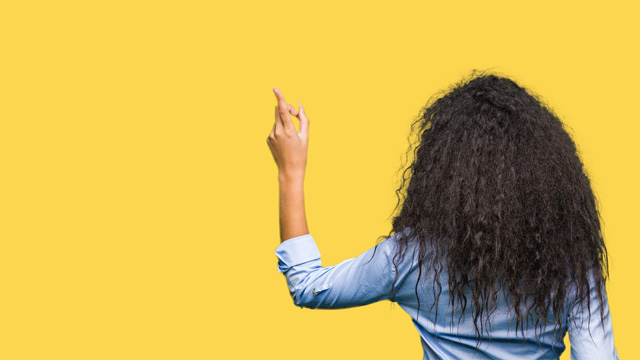 When a student-athlete in Atlantic County, New Jersey was forced to cut off his hair or forfeit a wrestling match in December 2018, it sent shock waves across the state and across the nation. People of every race, ethnicity, age, gender, and sexual orientation were angered and appalled as they viewed the news footage video of a coach cutting the student’s hair.

A practice referred to as hair discrimination or hair harassment, it is often rooted in racism and structural violence. Nationally, reports of students being sent home because of their hairstyles, as well as professionals being passed over for employment or promotion due to the way their hair naturally grows, have become much more common.

Almost one year from the date of the wrestling match which sparked this national discussion, New Jersey became the third state to pass a CROWN Act—an acronym for Creating a Respectful and Open World for Naturals—to protect the rights of those who choose to wear their hair in natural hairstyles. On January 29, the Bloustein School will sponsor a public event “Crown Conference: Can Public Policy End Hair Discrimination?” to bring together state legislators, stakeholders, and members of the public to discuss the next steps of education and implementation.

Moderated by Patricia O’Brien-Richardson, Ph.D., MS. Ed, an Associate Professor of Teaching at the Bloustein School, the panelists will include Sandra Cunningham, State Senator and Angela McKnight, Assemblywoman, both co-sponsors of the bill; Dr. Bernice B. Rumala and Shemekka Ebony Coleman, Crown Campaign co-founders; and Karen Thompson, Senior Attorney, ACLU.

At the Bloustein School, Dr. O’Brien-Richardson, explores the social, cultural, and structural factors that influence the health of women and girls of African descent, such as hair, and has widely contributed to the growing body of literature addressing the need for public policies on hair discrimination. She recently discussed her research and the significance of the CROWN Act.

What made you decide to focus your research on hair discrimination?

My research centers on how sociocultural factors, such as hair, shape the health of women and girls of color, particularly black adolescent girls. When you look at data exploring health disparities, women and girls of African descent are disproportionately affected by chronic diseases when compared to their racial and ethnic counterparts. As I explored this concept further, conducting focus groups and interviews with this population, I found that hair was a contributing factor. Many black women and girls of African descent avoid physical activity, a key contributor to health, in order to maintain their hairstyles which often require time, effort, and money to remain neat, styled, and oftentimes straight. Eurocentric beauty and body standards in our society have historically rejected black bodies and black hair. These standards embedded in the fabric of society and rooted in racism in our country are discriminatory, permeating schools and places of employment.

These practices have reached the point where girls as young as 8-years old have reported being socially harassed by schools because of their hairstyles. Others have concerns of being rejected in their future careers because of their hair textures. Children at this age should be deciding which sport to play in school or what subjects interest them, not whether their hairstyle will send them home from school or lesson their chance of employability one day. Although this is something that adult black women have known and experienced for decades, research conducted by Opie & Phillips, the Good Hair study and others support these sentiments. That is when I knew I had to explore this further.

How does hair discrimination become a socio-cultural barrier?

It is difficult to imagine that the texture of hair could bar someone from school, employment, or a promotion, yet every week there are cases of this common practice on the nightly news. These are the ones we know of, mostly due to social media. But countless more go unreported. Young boys and girls have been sent home, penalized, and expelled for wearing their hair the way it naturally grows, barring them from socially expressing themselves and their culture. The equivalent would be expelling a student from school for wearing a straight ponytail or not hiring someone because of their straight, shoulder length hair.

Similarly, across the country, news of professionals being refused employment due to natural hairstyles have become ubiquitous. It was only within the past five years the Marines and the Army allowed hairstyles commonly worn by people of African descent. Prior to that, those who wore braids, twists, or locs were penalized. So, hair discrimination has worked its way into corners of our society socially and culturally creating barriers and demonstrating a need for policy.

Your research focuses on hair as a social determinant of health, specifically among black women. Can you explain some of the outcomes of hair discrimination among this group?

Black hair has historically been controversial. From Afros to locs, those who choose to wear it, particularly professionally, face stigmatization, micro-aggressions, and negative assumptions. An undertone that natural hair is unacceptable, unprofessional, and even ugly continues to exist in society, the workplace, and in recruitment practices, producing financial, emotional, and psychological outcomes for victims of hair bias.

Likewise, children and youth who are prevented from expressing their cultural, ethnic, or social identity, due to stereotypes placed on them exist in direct isolation to the dominant norms of their school or community. This makes it difficult for them to develop and access social networks, fit in, and be accepted. Facing social rejection can have a tremendous impact on their developing character, self-identity, and development psychologically, emotionally, and mentally.

Healthwise, my own research on hair and physical activity found that girls who had curlier hair textures were more likely to be obese than those with less curly textures, and those who had physical education in the morning were less likely to be physically active in gym class. After having a gym class in the morning, they did not want to spend the entire day with messed up, sweaty hair until the end of the day. Black hair is texturally different and curlier than other types of hair. It takes time, effort, and money to be restyled or straightened after it is styled. No one will choose to disrupt it, causing it to be sweaty, and messy, or as adolescents often say, “looking like a hot mess” for 45-minutes of physical activity. Black women and girls reported not wanting to mess up their hair or get sweaty, and would rather avoid physical activity, or move less in gym class than disrupt their straight or styled hair. Others felt social and societal pressure to have hair that was neat, and not unkempt, an offensive term used to describe the hair of black people during slavery and the Jim Crow era.

How can schools and public health professionals help to break down the barriers of hair discrimination?

When a school sends an 8-year old boy, or 10-year old girl home because their bundle of curls is deemed distracting, or their braids are unacceptable or are told their locs must be cut to participate in school sports, what message does this send to our children, our communities, and our society? That you are unacceptable as you are, and you must be changed in order to be accepted.

School administrators and public health professionals need to first acknowledge and explore their own biases. We all have them. Next, we must shift that lens to the culture around us, creating a safe, welcoming space for all who enter their schools and workplaces to be appreciated, welcomed, and accepted. Training in cultural competency, culturally responsive teaching, and cultural humility should follow and frequently updated.  Lastly, policies should be developed and vetted to all parties involved, from the victims of hair discrimination, their families, and their communities. Schools need to look at all children through a cultural lens of equity. They should use culture as an inclusive tool, rather than exclude on the basis of it.

As a result of your research, you created an after-school program, Curls on the Move, for young girls. In what ways are young girls benefitting from this program?

Curls on the Move is a health, hair, and leadership club for girls. It is a part of my non-profit organization, Move it Nation, Inc. Girls get to practice self-care and well-being, promote love for their hair, practice college and career leadership skills, and learn how to advocate for policy and social justice issues such as hair discrimination.

Young people are watching the national conversation on hair discrimination. They see other girls and boys being sent home from school because of hair textures and hair styles just like theirs. Curls on the Move helps them do something about it by honing their advocacy skills and teaching them how to speak their truth in a supported environment with peers and mentors. The girls experience physical, mental, social, cultural, and educational benefits. In their own words, Curls on the Move club members have said:

My ultimate goal is to continue to acquire donors and funding for the program, see it spread to schools, homeschools, book clubs, community centers, and evaluate it with continued research for additional outcomes.

Now that the CROWN legislation has passed in New Jersey, what are some of the next steps that need to be taken towards implementation in the state?

Equipping businesses and schools with the tools they need to be aware of the legislation, helping them build a culture of appreciation for culture and diversity, and informing individuals of the steps they need to take in order to file a claim of hair harassment.

What does the passage of this legislation mean for the rest of the U.S.?

For more information about the CROWN Act, visit https://www.thecrownact.com/