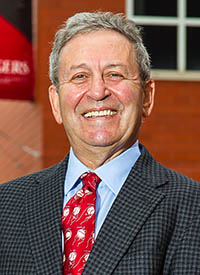 Dr. Michael R. Greenberg, Distinguished Professor, Edward J. Bloustein School of Planning and Public Policy, has been named the 2019 recipient of the University’s Daniel Gorenstein Memorial Award. A special award ceremony and lecture will be held on Thursday, April 18 at 5:00 p.m., at the Gov. James J. Florio Special Events Forum.

Dr. Greenberg will give a talk entitled “Risk-Informing Environmental Health Policy: Five Decades of Opportunities with Mixed Success.” Immediately following the lecture, a reception will be held in Dr. Greenberg’s honor in the main lobby of the Civic Square Building.

“I am delighted that Dr. Greenberg has been selected as the recipient of the Daniel Gorenstein Memorial Award,” said Barbara Lee, Senior Vice President for Academic Affairs at Rutgers University. “He represents entirely the ideals of this singular recognition named in honor of a scholar and intellectual who has made deep and lasting contributions to Rutgers and the world.”

The Daniel Gorenstein Memorial Award was established in 1993 by the family, friends, and colleagues of Daniel Gorenstein to commemorate Professor Gorenstein’s innovative mathematical research, his skillful and enthusiastic exposition of his field, and his wise and devoted service to Rutgers University. The award was first presented in 1994 and is given each year to a Rutgers University faculty member noted for both outstanding scholarly achievement and exceptional service to the University. Dr. Greenberg will be the 26th recipient of this award.

Dr. Greenberg is a Distinguished Professor at the Bloustein School. Public health is at the core of Professor Greenberg’s exemplary scientific work related to developing methodologies for solving emerging challenges at the nexus of environmental planning, public policy, and health. Over an exceptionally productive career, he has published more than 30 books and well over 300 articles. He has been a member of many National Research Council Committees, including those addressing the disposal of the U.S. chemical weapons stockpile, chemical waste management, and the degradation of the U.S. government physical infrastructure. He has served on advisory boards for a large variety of agencies, including the Environmental Protection Agency and the NJ Commission on Cancer Research. Dr. Greenberg has also chaired a committee for the U.S. Senate and House Appropriations Committees examining the U.S. DOE’s prioritization of human health and safety in its environmental management programs.

His work has been widely recognized with such awards/honors as being named Fellow of the Society of Risk Analysis, Distinguished Career Achievement Award from the International Society for Risk Analysis, and Distinguished Scholar Award from the American Association of Geographers. Dr. Greenberg served as Editor-in-Chief of Risk Analysis from 2008 to 2013, overseeing its path to becoming the world’s leading journal in this vital field.  After stepping down as editor, he continued to serve on the journal’s advisory board, while also serving as associate editor for environmental health for the American Journal of Public Health. He has been a leader in the Rutgers University community for decades, serving as an early member of the Committee on Academic Standards and Priorities, and as Associate Dean of the Bloustein School (2000-2017) and Interim Dean (2017-2018). He also helped establish a variety of centers to coordinate research on areas of public importance.  He was co-founder and director of the National Center for Neighborhood and Brownfields Redevelopment; and founder of the Center for Transportation Safety, Security and Risk, a Center of Excellence of the U.S. Department of Homeland Security. Professor Greenberg is an outstanding teacher who has mentored a number of undergraduate and graduate students. He is committed to high-quality instruction and especially undergraduate education.