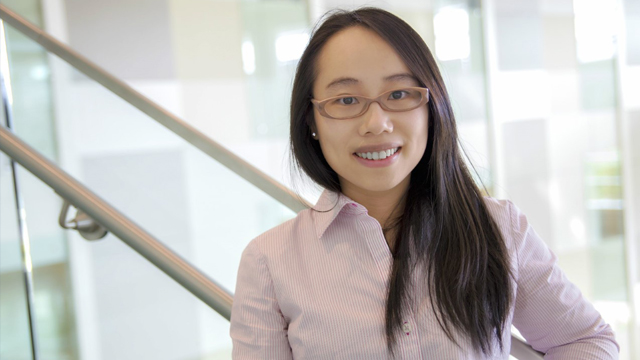 Wenwen Zhang, Ph.D. was attracted to the Bloustein School because of its strong reputation in transportation planning and its new program in public informatics; the Voorhees Transportation Center and its sophisticated use of GIS for planning dovetailed with her own research interests.

Those interests included the effects of autonomous vehicles on land use.  Her dissertation focused on how the use of autonomous vehicles determined where families would relocate.  She discovered that the size and type of family influenced where they relocated; some families were willing to work remotely whereas others chose to live closer to their place of business. Factories tended to become more remote from city centers while financial and other service sectors of the economy valued locations closer to the city center.

Dr. Zhang’s current area of research centers on how different cities react to autonomous, shared vehicles. She has discovered that the cities that are the most decentralized and diversified are more likely to benefit and adopt autonomous, shared vehicles. The public informatics side of her research looks to improve the urban built environment and making it healthier and more energy-efficient. This includes a longitudinal study of cardiovascular disease in cities based on a city’s infrastructure.  Her next step is the study of the advancement of emergent transportation technology’s influence on people’s lives such as where they prefer to live.

China’s planning programs are typically focused on urban
design; Dr. Zhang was interested in the social aspects of the planning process
with an emphasis on using GIS to solve problems.  This led Dr. Zhang to come to the United
States where GIS tools are commonly used to remedy challenges facing urban
areas.

She faced several challenges when she first came to the United States as a graduate student at Georgia Tech, where she earned her M.A., M.C.R.P., and Ph.D.  The first one was learning to navigate Atlanta’s bus system. She had to learn bus routes and schedules, which confirmed her decision to study transportation planning.

When asked the biggest difference between Chinese and American universities, Dr. Zhang responded that Chinese students are not encouraged to talk in class or voice their opinions.  The professor lectures and then leaves. Questions or comments by students are not sought.  Students do their homework and are graded solely on that.  Students are not expected to engage with professor. Upon her arrival in the U.S., at first Dr. Zhang was not happy that she had to engage during class; she has since come to believe that this method of teaching is good.  Interaction assists professors in understanding what students have learned and absorbed.  She added that professors don’t know everything and having access to student’s experiences and opinions can be good for everyone.

When she’s not teaching, conducting research or writing Dr.
Zhang like to play table tennis, hike and draw.

A Thank-You to Our Essential Workers