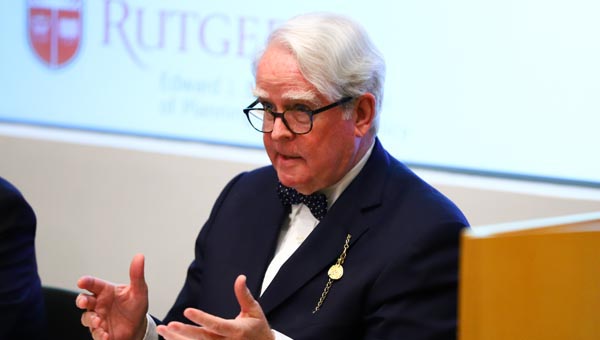 The New Jersey Commission on Professionalism in the Law recently announced that Hon. Paul W. Armstrong, JSC (ret). MA, JD, LLM, has been presented the commission’s Lighthouse Award, honors an attorney or judge whose professional and community-based efforts serve as an inspiration to colleagues.

Judge Armstrong, who retired from the bench in 2015, is currently a Senior Policy Fellow and Judge in Residence in the Bloustein School’s Master of Health Administration program.

He and two others are being recognized with outstanding career achievement awards. Joseph A. Hayden Jr., a partner at Pashman Stein Walder Hayden in Hackensack, will receive the 2020 Daniel J. O’Hern Award. Sabrina G. Comizzoli, senior appellate counsel in the appeals division in the U.S. Attorney’s Office for the District of New Jersey, will receive the 2020 Charles J. Hollenbeck Award.

“The award recipients represent the best attributes of the legal profession. The Commission on Professionalism joins with its colleagues in recognizing the recipients for their dedication and commitment to the highest standards of professional integrity and personal courtesy while still vigorously advocating for the interests of their clients. We should all aspire to follow their example in our own professional endeavors,” said Karol Corbin Walker, chair of the commission.

“I am honored to be placed in the renowned company of the past recipients of the signal Lighthouse Award,” Judge Armstrong said in his virtual acceptance speech. “I would also like to extend congratulations to my fellow honorees, as well as the New Jersey Commission on Professionalism in the Law on the occasion of its 25th Anniversary. For a quarter of a century, its distinguished membership has, through their witness, endeavored to impart by signal example how the highest respect for the law—coupled with fast adherence to the standards of professional responsibility—remains the hallmark of New Jersey’s exemplary system of justice. Moreover, the past and present members of the Commission have truly realized their mission of strengthening the law’s traditional values and instilling a sense of profound duty and public purpose which informs and authenticates the practice of law as a noble and distinguished profession. We owe much to this remarkable cooperative venture of the New Jersey State Bar Association and extend every best wish for its future good works on behalf of every member of the Bar.”

While serving as a Somerset County Superior Court judge for 18 years, Armstrong presided over many notable cases, including serial killer nurse Charles Cullen. As an attorney, he was a pioneer of patients’ rights and argued several landmark cases before the New Jersey Supreme Court and U.S. Supreme Court. He successfully argued the Karen Ann Quinlan case, which became a catalyst for the hospice movement. And his representation in the case of Nancy Beth Cruzan, a car accident victim, helped promote greater use of living wills and advance directives.

He was a principal draughtsman and legislative architect of the New Jersey Advanced Directives for Health Care and the Declaration of Death Acts and has also served as chairman of the New Jersey Bioethics Commission and the Governor’s Advisory Council on AIDS. He is an adjunct professor at Rutgers Law School-Newark and the Robert Wood Johnson Medical School, where he teaches about the interrelationship of medicine, ethics and law.

“Judge Armstrong is a brilliant jurist who served with distinction for 18 years during which time he treated litigants and attorneys alike with the utmost dignity and respect. He is a consummate gentleman to all who have the privilege to interact with him,” said Heidi Ann Lepp, president of the Somerset County Bar Association.

“After retirement from the bench, he continues to reflect the ideals of professionalism through his extensive pro bono work teaching as a senior policy fellow at Rutgers University, serving on advisory committees and continuing to work with the Samaritan Homeless Interim Program, of which he was a founding member.”

The Professionalism Awards are traditionally presented at an annual luncheon but were not held this year because of the pandemic. A video of Hayden, Comizzoli and Armstrong making their acceptance speeches may be found on the NJSBA website.