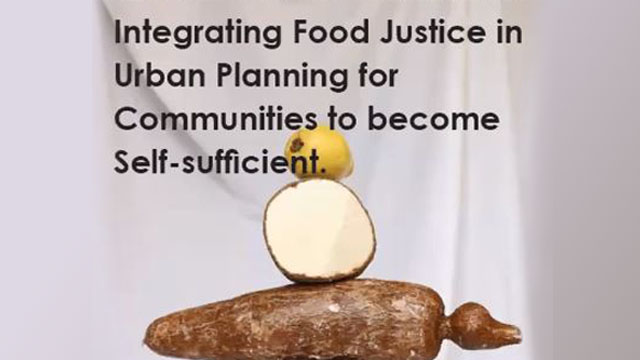 by Jas Sarna, School of Arts and Sciences and SAS Honors Program Scholar, Class of 2024

The Bloustein Social Justice Committee held a virtual event in late February regarding food justice in urban planning. The event, a follow-up to their earlier event discussing the importance of art and culture in urban planning, focused on challenging the idea that food is trivial in planning and talked about the far-reaching benefits of food justice in communities. Featured speakers included Jeff Hou, Professor in the Department of Landscape Architecture at the University of Washington; Teresa Mares, Associate Professor in the Department of Anthropology at the University of Vermont; and Sheryll Durrant, Kelly Street Garden Manager and Board President of JUSTFOOD, a nonprofit addressing food inequity in New York City.

Dr. Hou explained his work and his experiences with community gardens. Detailing their importance for food justice he said, “Urban gardens enable ethnic communities to grow food that is important to their culture. Growing food supplemented their income by reducing their grocery bill, how it strengthens social cohesion, builds social capital, and produces knowledge”.

He went on to describe the history of the
Danny Woo Community Garden in Seattle, Washington, and its emergence in the
1970s following protests against the construction of a sports stadium in the
area. To the people of the community, it serves as a place for socializing in
addition to growing food. Through the University of Washington Neighborhood
Design/Studio Build program, embellishments have been made to the Danny Woo
Garden including a community kitchen, dining space, class and concert space,
and tool sheds. With these structures in place, the community garden transforms
into a lively community hub known for hosting memorable events.

Dr. Hou then recounted the Capital Hill
Occupied Protest- CHOP Garden in Seattle. Following the death of George Floyd
in June of 2020, standoffs between protestors and Seattle Police led to a
six-block area, including Cal Anderson Park, being taken over by protestors.
The community garden they built in that occupied space served to bring more
people to the protests and educate and address more inequalities. It also
became a place of refuge from the conflict and a resting place for protestors.
When CHOP Garden was reoccupied, the participants went on to work in other
community gardens. Hou ended the discussion of his work by speaking on CHOP
Garden’s legacy and how it is helping to start conversations on how to change
public spaces, including Cal Anderson Park, to be more inclusive.

Next Dr. Teresa Mares spoke on her work
addressing food injustice in rural Vermont which looks at migrant farmworkers
in the dairy industry. Dr. Mares explained how her work has challenged the
U.S.D.A.’s tools for defining food insecurity. She pointed out how food
security is more complex than just having money. She argues that food
insecurity should incorporate ideas like avoiding border control, lack of
mobility, having to rely on third parties to access food, and having limited
access to cultural foods, all of which are especially relevant for undocumented
workers.

To deal with this issue, Dr. Mares has worked
to build community gardens in the areas where these workers lived to help
address their need for more food and more culturally familiar foods. Huertas, translating to gardens, is the
food security initiative managed through the University of Vermont’s
Extension’s Bridges to Health Program. While admitting that there were limitations
with the Huertas due to geography, weather, and the immobility of a garden made
for mobile communities, Dr. Mares highlighted the benefits of community
gardens. She said, “Gardens can give people a really powerful way of
maintaining connections to culturally familiar foods, to share those foods with
their children who might be very far away from their home cultures, and it also
becomes a sight of much more than food production.”

The Kelly Street Garden in the Longwood
section of the South Bronx, NY was then introduced by Sheryll Durrant. She
described how the area is subject to environmental pollution from trains,
traffic, and Hunts Point and how Kelly Street Garden helps address the food
insecurity issue in the area. In the year since the pandemic started, Kelly
Street Garden has helped distribute over 25,000 pounds of food. She credits
this achievement to funding partners, farms that worked with the garden, and
volunteers that helped make distribution possible.

To the people of the South Bronx, Kelly Street Garden is about more than just food. There, they host various programs touching on topics like EBT and SNAP benefits, cheap recipes and cooking, yoga, and art. In explaining the power of Kelly Street Garden, Ms. Durrant said, “At Kelly Street Garden, our connection to land is about reclaiming space, repairing something, building a thread, weaving a fabric, and coming together as a South Bronx community. We seek to bring the bounty of the land to everyone. We seek to find abundance in place of scarcity because, in fact, there is no scarcity, just greed. And as I think about my relationship to the planet, I’m not interested in owning land- I am interested in stewardship and solidarity.”

The program then moved to questions from
the audience. The speakers addressed how lively community garden spaces are and
how much they bring to the areas they are located in. Dr. Hou talked about how
Cal Anderson Park being accidentally chosen as the CHOP garden location turned
out to be perfect because of the community there, while Dr. Mares spoke on the
unique challenges of the migrant workers in rural Vermont dairy farms and how
specific their experiences were with the Huertas. Ms. Durrant talked about
engaging children from local schools in Kelly Street Garden and how they return
year after year and recognize a passion for urban agriculture. Each speaker
reiterated how community gardens represent something greater than food alone to
the people of the area.

Addressing how community gardens
incorporate advocacy, Ms. Durrant said “Food to me is the gateway to all things
justice. If we can’t tackle that, we can’t tackle housing, we can’t tackle
anything else. We need equity in food first and then once we achieve that goal
then all the other goals that we aspire for will be more achievable.” The
program soon concluded with thanks to the panelists and participants were
tasked with thinking about the immense value of community gardens in urban
planning and their ability to effectively address food injustice and larger
communal issues.