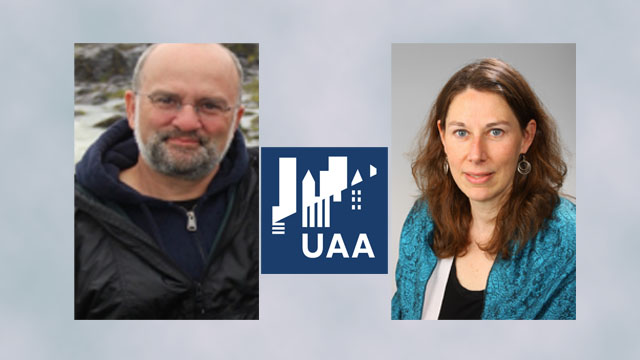 The Bloustein School is pleased to announce that two professors have been recognized by having their names added to the Urban Affairs Association Distinguished Service Honor Roll, which recognizes the organization’s most impactful service leaders.

The Urban Affairs Association (UAA) is an international professional organization for urban scholars, researchers, and public/nonprofit service providers. Professors James DeFilippis, Ph.D. and Kathe Newman, Ph.D., were honored this year along with 14 other urban scholars.

Dr. DeFilippis’ research focuses on the political economy of cities and communities. He is particularly interested in the processes of social change, and questions of power and justice in cities. While his interests are broad, it is questions of community control and building forms of power in poor neighborhoods that have been at the center of his work. He began working on and with efforts for community control over economic development more than 20 years ago and continues to work with and in support of community land trusts, community development credit unions, worker co-ops and other forms of community control. He is a founding member of the New York City Community Land Initiative (NYCCLI) and the Western Queens Community Land Trust (WQCLT). He is the author or editor of six books, more than 50 articles and book chapters, and many applied monographs and reports for practitioners and advocates. He holds a Ph.D. in Geography from Rutgers.

Dr. Newman is Program Director of the Urban Planning and Policy Development Program and founding director of the Ralph W. Voorhees Center for Civic Engagement. She is also a member of the Graduate Program in Geography at Rutgers University. Her work focuses on urban governance, housing finance, gentrification, foreclosure, community food security, and urban political economy. This work has appeared in a co-edited book, book chapters, and articles in Urban Studies, International Journal of Urban and Regional Research, Urban Geography, Urban Affairs Review, Urban Geography, Shelterforce, Progress in Human Geography, Housing Studies, GeoJournal, and Environment and Planning A. She is an associate editor at Environment and Planning A: Economy and Space. Kathe has been a member of UAA since the mid-1990s. She has chaired the conference program committee; sat on a number of committees including the Activist Scholar Award and the Best Book Award Committee and is currently on the finance committee; served on the board; and mentored graduate students at the first two UAA preconference student workshops. She holds a Ph.D. in Political Science from the Graduate School and University Center at the City University of New York.

UAA is dedicated to creating interdisciplinary spaces for engaging in intellectual and practical discussions about urban life. Through theoretical, empirical, and action-oriented research, the UAA fosters diverse activities to understand and shape a more just and equitable urban world. UAA sponsors the Journal of Urban Affairs, a refereed journal, that publishes manuscripts related to urban research and policy analysis of interest to both scholars and practitioners. UAA recently launched a new refereed journal, Race, Ethnicity and the City, designed to create a discourse on issues of race, ethnicity, and identity within and around urban spaces. UAA also sponsors Upsilon Sigma – The Urban Studies Honor Society, an international, multidisciplinary honor society dedicated to recognizing and encouraging excellence in scholarship, leadership, and engagement in urban studies and related fields.