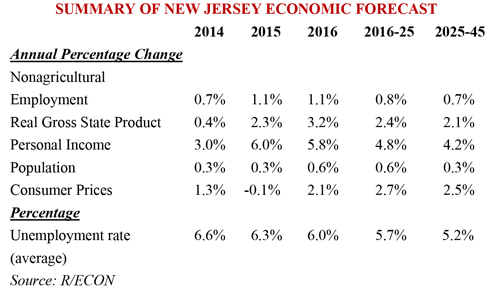 Though New Jersey’s economy is performing better than in 2014, it will continue to grow more slowly than the nation’s through 2025 before keeping pace with the national rate over the next 20 years, said Nancy Mantell, director of the Rutgers Economic Advisory Service, at R/ECON’s semiannual subscriber conference today.

Mantell explained that while New Jersey’s employment base by 2045 will be nearly 1 million jobs larger (23 percent higher) than at its 2008 peak – the economy’s makeup will be far different than at present.

“The structure of the economy will change considerably over the forecast period,” Mantell said. “Information and manufacturing will continue their long-term declines as sources of jobs, and of the proportion of jobs in New Jersey, while the trade and public sectors will add jobs but decline as a share of the total.”

“The larger service sectors – education and health care, professional and business services, and leisure and hospitality services – will provide ever larger proportions of jobs.”

The Rutgers economist cautioned that the thing to remember about such a long-term forecast is that it is intended for use for long-term planning and thinking about the economy, and not for precision in its numbers. Mantell noted, for example, that the projection assumes no specific recession/recovery cycle to disrupt the state’s or nation’s growth.

“This seems rather far-fetched, given that the average business cycle, peak to peak, in the U.S. since World War II has lasted 24 quarters and the current cycle is now in its seventh year,” Mantell admitted. “This is a long-term trend forecast. It does not purport to indicate at what points – if any – cycles may occur.”

Given the anticipated trajectory of New Jersey’s job growth, the state’s share of the nation’s job base will barely change, dipping just 0.01 percent to 2.84 percent by forecast’s end. During that time, New Jersey’s real output will expand about 2.3 percent per year.

Over the past year, the Garden State’s unemployment rate fell substantially, from 6.5 percent in July 2014 to 5.9 percent 12 months later. Mantell expects unemployment to average 6.3 percent this year and to decline to a 5.4 percent average from 2017 on, still somewhat higher than the national mark.

In a bit of good news, inflation should not worry New Jerseyans, even over the long term, Mantell said. Consumer prices here rose 1.4 percent in 2013 and 1.3 percent in 2014, slightly lower than the national rate. Falling oil and other energy prices early in 2015, will contribute to a 0.1 percent drop in inflation for the year. The economist predicted consumer prices will rise at an average of about 2.5 percent annually from 2015 to 2025, and 2.6 percent from 2025 to the end of the forecast period, slightly faster than inflation in the U.S.

R/ECON, part of Rutgers’ Bloustein School for Planning and Public Policy, provides private-sector and government entities with a comprehensive set of tools for analyzing the New Jersey economy.

Read the executive summary of the related forecast.