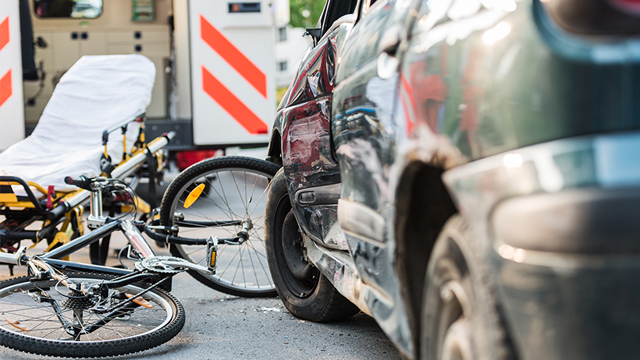 Have you ever wondered why we say, “a car hit a person” but we don’t say, “a hammer hit a person”?  Assistant professor Kelcie Ralph and Evan Iacobucci ( of the Edward J. Bloustein School of Planning and Public Policy, Rutgers University) worked with colleagues Dr. Calvin  Thigpen (of Lime) and Dr. Tara Goddard (Dept. of Landscape Architecture and Urban Planning, Texas A&M University) to examine the effects of language on how we perceive and respond to traffic crashes.

The full article, “Does news coverage of traffic crashes affect perceived blame and preferred solutions?  Evidence from an experiment” and is available for free via Open Access in the journal Transportation Research Interdisciplinary Perspectives.

In previous research, the team reviewed 200 news articles describing car crashes involving people walking (n=100) or biking (n=100).  The authors identified two recurring problems. The first problem occurs at the sentence-level, where seemingly minor choices consistently shift the blame towards the person walking or biking even when the events leading up to the crash were unclear.  For instance, journalists repeatedly used the phrase “a pedestrian was hit” to describe a crash. This sentence commits two sins. First, it assigns agency to an inanimate object. Until self-driving cars are available, this phrase has no place in crash reporting.

To illustrate the awkwardness of this phrase, consider a case where someone gets hit by another person swinging a hammer. The news report would not say, “person hit by hammer.” It would say, “someone hit a person with a hammer.” The second sin is that the sentence makes the person walking or biking the focus of the sentence—the star of the show. Linguistics studies suggest that that the focus of the sentence receives more blame. Another recurring sentence-level problem was the widespread use of the word “accident” instead of “crash”, which further obscures the fact that crashes are preventable.

To determine whether these minor linguistic issues actually matter, the authors conducted an experiment where participants read a news story about a crash and answered questions about who bore responsibility for the crash.

The experiment also provided evidence about the perverse effect of the second major problem in crash coverage.  Existing coverage tends to treat crashes as isolated events. An alternative approach is to frame crashes thematically by reporting crash statistics and highlighting the common elements in many crashes (high speeds and unsafe road design). By reporting on crashes in isolation, existing coverage obscures the fact that crashes are predictable and preventable. It also reduces the sense of urgency to address crashes because readers have no information about how often crashes lead to serious injuries and deaths.

When readers were exposed to thematically framed articles with crash statistics and a description of the roadway, readers shifted their blame from the pedestrian to features of the roadway. These readers were also more likely to support systems-based solutions to improving road safety like reducing speed limits and changing street design.