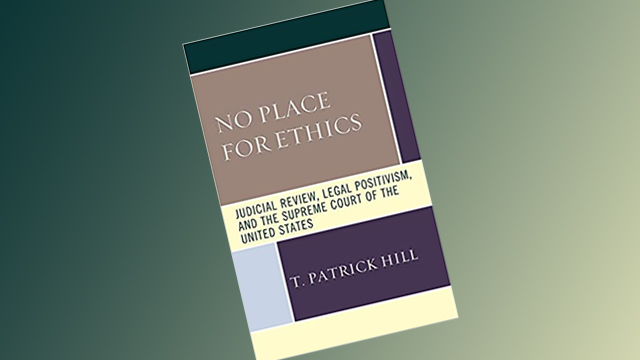 Associate Teaching Professor Emeritus T. Patrick Hill explores the legal proposition held since the 19th century that American law is justified simply because, as duly enacted, it is the law.  In his book, No Place for Ethics: Judicial Review, Legal Positivism and the Supreme Court of the United States, he argues that this is an incomplete understanding of nature of law.  He contends that law must be grounded in ethics as its ultimate justification.

In advancing this argument, Hill examines five major Supreme Court decisions to demonstrate that what, in these cases, is thought to be constitutionally acceptable is in regards to ethics unacceptable and therefore wrongly decided. The five cases involved are DeShaney v Winnebago County Dept. of Social Services, Lockner v New York State, FDA v Brown and Williamson Tobacco Corp., New York v United States, and United States v. Morrison. In each of these cases, fundamental norms of ethics were ignored and as a result, were responsible for a grave injustice.

The case of Joshua DeShaney is just one example of this regrettable outcome. Joshua DeShaney, a four-year-old infant, lived with his father after his parents divorced. He was repeatedly beaten by his father. His mother and others alerted the Winnebago County Dept. of Social Services to possible abuse by Joshua’s father. After monitoring the case of Joshua closely for a considerable period of time, Winnebago Social Services at one point removed Joshua from his father’s custody because of possible physical abuse, only to return him to his father’s custody. Not surprisingly, with increasing severity, the abuse continued until Joshua suffered permanent and irreparable brain damage from the accumulating consequences of abuse and Joshua had to be institutionalized. In taking legal action, Joshua’s mother sued Winnebago Social Services on the grounds that it had deprived  Joshua of his liberty interests in bodily integrity and consequently violated his constitutional rights under the due process provisions of the Fourteenth Amendment.

In deciding for Winnebago Social Services Chief Justice Rehnquist, writing for the Court, argued that the due process provisions only require the government not to interfere with, in this case, the rights of Joshua. However, there is no positive requirement to protect those rights. Drawing a stark verbal distinction between action and inaction, with no relevance to the facts of the case, Rehnquist insisted that since Winnebago Social Services had not actually abused Joshua, it could not be held accountable under due process for the abuse suffered by Joshua. That was inflicted by his father, who as a private actor was beyond the provisions of the due process clause. This argument led Rehnquist to declare that when Winnebago Social Services returned Joshua to his father’s custody, it left Joshua in no worse a situation than that he was in before being removed.

But this ignores the reality that in returning Joshua to a father known to be abusive, there were consequences in which Winnebago Social Services was complicit and for which, if justice is to be satisfied, it is answerable. But decided as it was, the constitutional provisions, divorced from ethics, were applied in a manner that resulted in grave injustice. What law that can be used in this way, is justified?  It is that law that is divorced from ethics and is considered its own justification. Unfortunately, De Shaney is not an anomaly here.

Each of the other cases examined in the new book suffers from its divorce from ethics. The book is available directly from the publisher, from Amazon, and from other mass-market retailers.