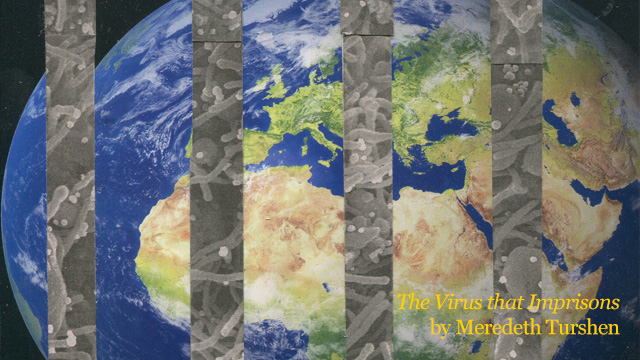 Professor Emerita Meredeth Turshen and Annie Thébaud-Mony, emerita director of research at the National Institute of Health and Medical Research of France, recently explored how COVID-19 has exposed fatal health inequities in an article of the same name published in the Monthly Review, An Independent Socialist Magazine (Nov. 1, 2020).

They began their research by looking at the “Health for All in the Year 2000!” initiative adopted in 1978 by UNICEF and the World Health Organization. The initiative affirmed health as a human right, promised access to health based on socioeconomic development promoted in the New International Economic Order, sanctioned government provision of universally accessible primary health care, and condemned as unacceptable the existing gross inequality in people’s health statuses.  Drs. Turshen and Thébaud-Mony and contend that 40 years later much has changed, and not for the better.

They found that the financialization of the U.S. healthcare system, the water supply, and the food supply chain have all contributed to health inequities that resulted in the health care disaster of COVID-19, which could have been avoided.  The evolution from privatization, to commercialization, to financialization, results in a system that puts an inflated value on a good or service to the detriment of its end users.  Neoliberal economic policies mandated by The World Bank turned government-run and funded public health services to private health care providers. This moves away from the goal of comprehensive, universal, primary health care to a commercialized system.

Under commercialization, there is a focus on fee-for-service schemes, which lower utilization of health care. Financialization is the third phase. Under this system health care is transformed into a salable and tradable asset for global investors.  The goal of large hospitals and medical systems is the maximization of profits instead of maximizing the health and welfare of the population.  Drug prices are maximized because of profits and therefore, shareholder value increases.  Drug innovation is not a priority.  Globalized supply chains may provide cheaper medical supplies under normal circumstances, but when the challenges of quick delivery of medical supplies in the face of a large-scale medical emergency such as a pandemic, the system crashes.  U.S. pharmaceutical companies opt to maximize profits rather than invest in new drug research.

Financialization has also come to the water and food supply chain.  Water is no longer viewed as a public good provided to ensure the health and well-being of citizens. Clean water for frequent hand-washing is needed to combat COVID-19.  However, only 40 percent of the world’s population has access to a hand-washing facility with soap and water at home.  Water has become a commodity to be bought and sold; instead of taxes to maintain and improve sewage systems, tariffs are charged which fall harder on the poor.

The food supply chain also is not immune to the repercussions of financialization.  The pandemic has disrupted local production, supply chains, transport, and distribution. Food production is now in the hands of factory farms and distributors.  Financial actors are involved in food retailing, food processing, grain trading, price setting, provision of agricultural inputs. Food workers are exploited through low wages, increased workloads, and unpredictable work schedules.

The emphasis on extracting maximum profits from public goods such as health care, water, and the food supply has led to systems that meet the needs of investors as opposed to ordinary people.  Ensuring the health, safety, and food supply for everyone is insignificant when investors are seeking to maximize profits.

When the financial interests of conglomerates compete with the health and well-being of the poor and middle class, the financial conglomerates win.  The entire system needs restructuring to ensure that the next pandemic will not imperil the life, health, and dignity of all.