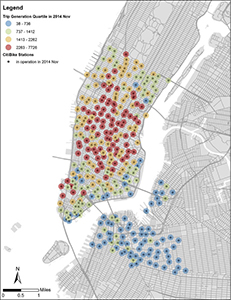 Cities around the world and in the US are implementing bikesharing systems, which allow users to access shared bicycles for short trips, typically in the urban core. Yet few scholars have examined the determinants of bikeshare station usage using a fine-grained approach. We estimate a series of Bayesian regression models of trip generation at stations, examining the effects bicycle infrastructure, population and employment, land use mix, and transit access separately by season of the year, weekday/weekend, and user type (subscriber versus casual). We find that bikeshare stations located near busy subway stations and bicycle infrastructure see greater utilization, and that greater population and employment generally predict greater usage. Our findings are nuanced, however; for instance, those areas with more residential population are associated with more trips by subscribers and on both weekdays and non-working days; however, the effect is much stronger on non-working days. Additional nuances can be found in how various land use variables affect bikeshare usage. We use our models, based on 2014 data, to forecast the trips generated at new stations opened in 2015. Results suggest there is large variation in predictive power, partly caused by variation in weather, but also by other factors that cannot be predicted. This leads us to the conclusion that the nuances we find in our inferential analysis are more useful for transportation planners.