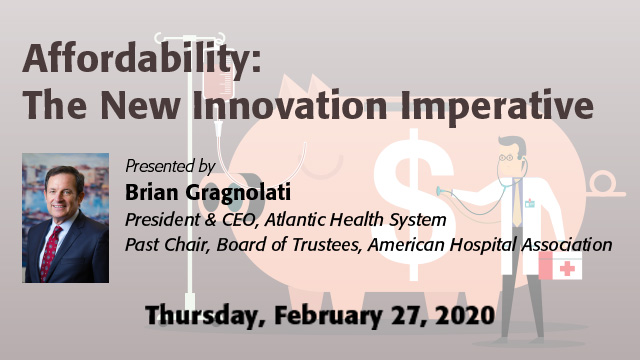 This event is free and open to the public, but RSVP is requested by visiting http://go.rutgers.edu/hcaffordability.

Why would a successful health care system change its winning strategies to move toward value-based care?  At this event, Mr. Gragnolati will offer a real-life view of one organization’s transformational journey in the name of greater access and affordability for every patient and consumer.

The discussion will focus on the adaptive change required to mobilize key stakeholders in governance and leadership, build collaborative relationships with former competitors and those who pay for care (employers, private insurers and government), all while experimenting with new payment and physician integration models and innovative care coordination initiatives.  Looking at health care through the lens of affordability, this session will encourage individuals and organizations to work together to design a more inclusive, equitable health care system that puts patients first.

In addition to his role at Atlantic Health System, Mr. Gragnolati is the past chair of the Board of Trustees of the American Hospital Association (AHA), an organization dedicated to leading, representing and serving hospitals and health systems in their work to advance the health of individuals and communities. In 2007 and again in 2015, Mr. Gragnolati received the AHA’s Partnership for Action Grassroots Champion Award, recognizing a hospital leader who has effectively educated elected officials on major issues affecting hospitals, while advocating for patients and the community.

Prior to his tenure at Atlantic Health System, Mr. Gragnolati served as Senior Vice President, Community Division of Johns Hopkins Medicine, and President and CEO of Suburban Hospital. He previously held executive positions at WellSpan Health, the Medical Center Hospital of Vermont, and Baystate Medical Center in Springfield, MA.